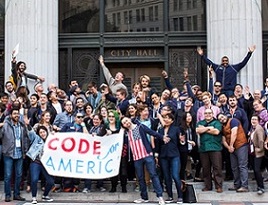 First Ever Gathering To Highlight the Work of City’s Neighborhood and Business Development Department, Office of Innovation, and Collaborative Partnership with Code for America

Miner: Through Working Collaboratively and Bringing In New Partners, We Are Making Progress Happen

SYRACUSE, N.Y. – Mayor Stephanie A. Miner announced today the City will host a Symposium on Civic Data, Innovation, and Economic Development on Thursday, March 16 from 1:00 p.m. to 3:30 p.m. at the Museum of Science and Technology (MOST), located at 500 South Franklin Street in Armory Square. This first-of-its-kind event will showcase the partnership between the City of Syracuse Department of Neighborhood and Business Development, Office of Innovation, and Code for America aimed at improving business development processes.

“Throughout my administration, we have focused on making Syracuse a twenty-first century city on the move. Through working collaboratively and bringing in new partners to share their ideas, we are making progress happen,” said Syracuse Mayor Stephanie A. Miner. “I am excited by the work we have done with Code for America and look forward to implementing it in the Office of Business Development, where we will make development in Syracuse easier, growing our economy and creating jobs.”

“Our team has really enjoyed working with City staff to make it easier for entrepreneurs to start and grow their businesses. The opportunity for Code for America to work with the city to make business services more user-friendly demonstrates one of the many ways Syracuse continues to emerge as one of the nation’s most innovative cities,” said Efrem Bycer, Economic Development Director for Code for America.

The Symposium will feature a keynote address by Mayor Stephanie A. Miner. The featured speaker will be Mark Headd, a civic data expert who was the Chief Data Officer for the City of Philadelphia. The Department of Neighborhood and Business Development, Office of Innovation, and Code for America will deliver presentations on their efforts and the event will wrap up with a panel discussion, including questions and answers from the audience, with representatives from each group. Those interested in attending are asked to RSVP here: https://goo.gl/BDV13y.

About Code for America

Code for America is a national nonprofit that believes government can work for the people, by the people, in the 21st century.

They organize a network of people who build technology to further local governments’ priorities of creating healthy, prosperous, and safe communities. Code for America’s goal: government services that are simple, effective, and easy to use, for everyone.