Miner: American Red Cross Is Always There When Our Community Calls

SYRACUSE, N.Y. – Mayor Stephanie A. Miner welcomed volunteers from the American Red Cross, Western and Central New York Region, to City Hall today, recognizing them for their efforts during a flag raising ceremony. The Mayor issued a proclamation declaring March as “Red Cross Month” in the City of Syracuse. 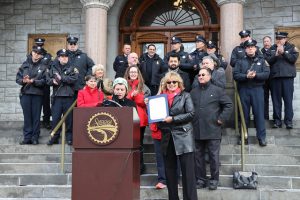 “The volunteers and leadership of the American Red Cross are always there when our community calls – responding to disasters, installing smoke alarms, and hosting blood drives,” said Syracuse Mayor Stephanie A. Miner. “I thank Rosie Taravella, her staff, and the volunteers who make so much good work in our community possible.”

“On behalf of the Central New York Chapter, I want to extend our deepest appreciation to our amazing volunteers, supporters and community partners. And thank you Mayor Miner for her support of the Red Cross,” said Rosie Taravella, Regional CEO, American Red Cross, Western and Central New York Region

About the American Red Cross

The American Red Cross depends on local heroes to fulfill its mission. Red Cross disaster volunteers respond to community disasters, providing shelter, food, emotional support and other necessities to those affected. It provides 24-hour support to members of the military, veterans and their families at home and around the world. It must collect nearly 14,000 donations of blood every day to meet patient needs. It trains millions of people in first aid, water safety and other lifesaving skills. And it supports the vaccination of children around the globe against measles and rubella.

The full text of Mayor Miner’s proclamation appears below:

Whereas, American Red Cross heroes are on the front lines every day, volunteering their time, give blood, take life-saving courses or provide financial donations to help those in need; and,

Whereas, In Syracuse, Red Cross heroes help people in need every day, working tirelessly to aid in time of disaster, when someone needs life-saving blood, or the comfort of a helping hand, providing round-the-clock support to members of the military, veterans and their families; and,

Whereas, The American Red Cross has been on the front line in disasters across the country and around the world, responding to hurricanes, tornadoes, floods and wildfires, most recently at aiding victims of flooding across the Southern United States; and,

Whereas, The American Red Cross is there for those in need, whether it is an injured service member far from home, a hospital patient in need of blood, a lifeguard saving a drowning child, or a heart attack victim; and,

Whereas, We dedicate the month of March to all those who support the American Red Cross mission to prevent and alleviate human suffering in the face of emergencies and recognize that our community depends on the humanitarian aid and good will of others.

Now, therefore, I, Stephanie A. Miner, Mayor of the City of Syracuse, do hereby proclaim the month of March, 2017 to be

In the City of Syracuse

In witness thereof, I have hereunto set my hand and caused the Seal of the City of Syracuse to be imprinted this thirteenth day of March, Two Thousand Seventeen.