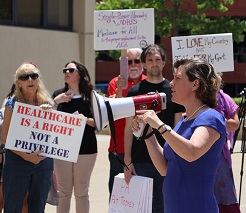 SYRACUSE, N.Y. – Mayor Stephanie A. Miner invited Rep. John Katko (R-Camillus) to join her in a public forum to discuss the Republican healthcare reform proposal and its impacts on Syracuse. Currently, the U.S. Senate is working on their version of the American Healthcare Act (AHCA), which is expected to be voted on next week.

“As Mayor, I must advocate for my constituents and their basic needs – including access to affordable, quality healthcare. I invite Rep. Katko to stand with me and have a thoughtful exchange of ideas over congressional Republicans AHCA proposal and what its impacts will be on the people of Syracuse,” said Syracuse Mayor Stephanie A. Miner. “It is vitally important that the people of Syracuse have access to quality, affordable healthcare – including the thousands of people who use the services of Planned Parenthood each year and those whose nursing home care is paid for through Medicaid. We must also support the important economic engine that is healthcare in Syracuse, with major hospitals employing thousands of area residents.”

The city of Syracuse is home to three major healthcare institutions: St. Joseph’s hospital, Upstate University Medical Center, and Crouse Hospital. Those three institutions combined employ more than 15,000 people in the city of Syracuse. If the AHCA passes, hospitals in Rep. Katko’s district could lose $83 million in federal funding, putting more than 4,500 jobs at risk.

Central New York is also home to more than 75,000 people who are reliant on the Affordable Care Act for their healthcare. Many of these are young entrepreneurs or people with pre-existing conditions who would not otherwise be able to afford healthcare.

Mayor Miner added: “Our community has a serious issue with opioid addiction and we cannot afford to reduce funding for efforts to combat that scourge – something the AHCA would do immediately. We need to ensure people in their darkest times have access to quality, affordable healthcare so they can receive the treatment they need.”