Mayor Miner joins the Anti-Defamation League and the United States Conference of Mayors to combat hate, extremism and bigotry.

Miner: We Must Show Solidarity With Americans Being Targeted by Hate

SYRACUSE, N.Y. – Mayor Stephanie A. Miner signed on the Mayor’s Compact to Combat Hate, Extremism, and Bigotry in America. The Compact was started by the Anti-Defamation League and the United States Conference of Mayors. 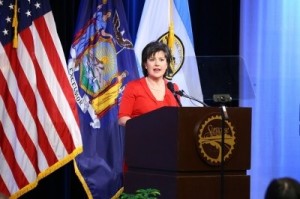 “In the wake of events in Charlottesville, it is important for leaders to vocally condemn extremism and domestic terrorism in America and in our own communities,” said Syracuse Mayor Stephanie A. Miner. “We must show solidarity with the Americans being targeted by hate and celebrate diversity.”

There are ten key components to the compact including openly rejecting extremism, white supremacy, xenophobia and all forms of bigotry. The compact also aims to denounce all acts of hate wherever they may occur; while balancing public safety, free speech, and acknowledging domestic terrorism. Education and dialogue are also a focus by making anti-hate and anti-bias programs in our nation’s schools, bringing targeted communities and leaders together to build trust, and openly celebrating diversity. The compact promotes law enforcement training and community member’s response to hate incidents and crimes as well as domestic terrorism. Lastly, it aims to maintain civil rights enforcement and strengthening civil rights laws when necessary.

The United States of America is a nation founded on principles of liberty and justice for all.  We treasure our freedom, our commitment to equality, and our democratic values. These values are what has made America great for more than 240 years.

Individual Americans can, and often do, agree to disagree with each other on issues large and small. Differences should be celebrated. And our freedom of speech and the other rights enshrined in the First Amendment are among our most cherished freedoms.

But our diverse and pluralistic nation has endured and thrived for centuries because we have been able to reject the forces of extremism and bigotry that could tear us apart.  The country has a long history of striving to be a more perfect union.  In the face of challenges and division, we have stood together – Americans of different races, ethnicities, religions, sexual orientations, nationalities, and political persuasions – and we have found ways to move forward….    The full text of the compact is available here.