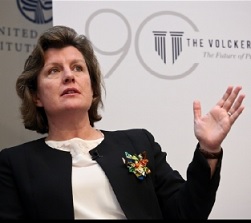 Miner: After Spending Eight Years Working to Build Syracuse Into a Twenty-First Century City, I Am Eager to Help Others in Government

SYRACUSE, N.Y. – Mayor Stephanie A. Miner announced today she has accepted an invitation to join the board of directors of the Volcker Alliance, an organization founded by former Federal Reserve Board chair Paul A. Volcker to bring together leaders in government innovation. Mayor Miner joins the board alongside Antonio Weiss, a senior fellow at Harvard University’s Kennedy School of Government and a former Counselor to United States Treasury Secretary Jack Lew.

“I am grateful for the opportunity to join thought leaders in politics, government, and business at the Volcker Alliance. After spending eight years working to build Syracuse into a twenty-first century city, I am eager to help others in government harness the many tools that exist to implement innovative new policies, respond to constituents, and pave the way forward for a new generation of governance,” said Syracuse Mayor Stephanie A. Miner. “I thank Chairman Volcker and Thomas Ross for the opportunity to join the Volcker Alliance and I embrace their mission of supporting more effective government.”

Thomas W. Ross, President of the Volcker Alliance, said, “We are honored to have Mayor Miner and Mr. Weiss join our Board. Their success in driving improvement in government policy and implementation—at the local and federal levels—is remarkable. We look forward to learning from their experiences to further advance effective government and to inspire more talented young people to follow their footsteps into public service.”

In November, Mayor Miner participated in a panel discussion about the future of government at the “Volcker at 90: Rethinking Effective Government” symposium that the Alliance hosted at the United States Institute of Peace in Washington, DC. The symposium was held in honor of the Volcker Alliance’s founder, Paul A. Volcker, and his legacy of public service. A video of her appearance is available here: http://bit.ly/2AW2z0D.

Mayor Miner will be attending a meeting of the Volcker Alliance in New York City on Thursday, December 7.

About the Volcker Alliance

The Volcker Alliance advances effective management of government to achieve results that matter to citizens. The nonpartisan Alliance works toward that objective by partnering with other organizations—academic, business, governmental, and public interest—to strengthen professional education for public service, conduct needed research on government performance, and improve the efficiency and accountability of governmental organization at the federal, state, and local levels.