Syracuse, N.Y. – Syracuse Mayor Ben Walsh today announced the City of Syracuse will extend the nuisance abatement order at Skyline Apartments for one year and require additional safety and security improvements by Green Skyline, the building’s owner. The City’s decision, outlined in a six-page order signed by Syracuse Police Chief Kenton Buckner, increases onsite security, cracks down on trespassers and requires reporting of complaints and safety incidents by Skyline managers to property owners.

“I strongly support Chief Buckner’s order. With additional input from residents, we’ve placed new requirements on the property owner that will make Skyline Apartments a better place to live for the hundreds of people who call it home,” said Mayor Walsh. “Ultimately, it is up to Green Skyline to live up to the duties of a responsible property owner. The City will continue to monitor and enforce these requirements to ensure Green Skyline does its job.” 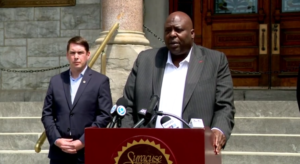 Chief Buckner’s order comes after the recommendation of a hearing officer who presided over an approximately four-hour meeting on May 10 at which residents and advocates testified regarding conditions at the property. Buckner’s order finds that “a public nuisance continues to exist, unabated” at the Skyline and that “the parameters set…for the Premises are appropriate and necessary to abate the public nuisance in existence at the Premises.”

In addition to extending the order for a period of one year, Buckner upheld all of the demands in the initial notice, including: the installation of security cameras; upgrade of security locks and alarm systems on doors; and the introduction of onsite security 24 hours a day, seven days a week.

Based on testimony and firsthand accounts of residents and further review of conditions by the Syracuse Police Department (SPD), the order also places new requirements on Green Skyline:

The nuisance abatement order is one of a series of steps the City has taken to address unacceptable conditions at the Skyline. It declared the common areas at the complex to be unfit for occupancy allowing the withholding of public assistance rent payments for a period of seven weeks. It also obtained an Order to Compel compliance with building code requirements related to elevators from the State Supreme Court, as well as a monetary judgment against Green Skyline for failing to comply with elevator building code requirements. The City continues to closely monitor code compliance at the Skyline and will initiate additional legal actions as needed.