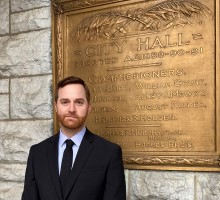 Syracuse, N.Y. – Syracuse Mayor Ben Walsh announced the appointment of Neil Burke as the new Director of Special Projects for the Department of Public Works (DPW). In his new role, Burke will be responsible for transportation initiatives, managing ongoing projects, staff, and daily operations within DPW. He will oversee numerous infrastructure projects geared toward making transportation in the city safer, easier, and more equitable, including the municipal sidewalk program, traffic calming installations, and the Traffic Management Center.

“Neil is a champion of using transportation and infrastructure to improve quality of life in the City of Syracuse. His previous work has helped enhance mobility, accessibility and safety throughout our community,” said Mayor Walsh.  “His new role will enable an even bigger impact on crucial infrastructure plans and progress in the future.”

Since 2016, Burke has served as a Transportation Planner for the City of Syracuse. His work involved coordination and implementation of planning projects, design review and analysis, and project management of various initiatives including the Municipal Sidewalk Program, Pavement Rating Program, and Syracuse Bike Share Program. Prior to working for the City of Syracuse, Burke earned his Master’s in Landscape Architecture from the State University of New York College of Environmental Science & Forestry and his Bachelor’s in Adolescent Education from the State University of New York at Oswego.

Outside of his work serving the community of Syracuse, Burke serves on the boards of the Central New York Regional Transit Agency and Tomorrow’s Neighborhoods Today. He began his new position in early November and will report directly to Jeremy Robinson, Commissioner of DPW.