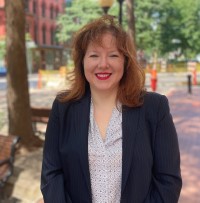 Syracuse, N.Y. – Syracuse Mayor Ben Walsh announced that Jennifer Tifft will lead the implementation of the City’s American Rescue Plan Act (ARPA) strategy as the City’s new director of strategic initiatives. Tifft, who will leave her current role as deputy commissioner of Neighborhood and Business Development (NBD), will continue to be responsible for the Syracuse Surge, Mayor Walsh’s strategy for inclusive growth in the New Economy.

“ARPA pandemic relief funds present a transformational opportunity for our City. I believe Jennifer Tifft is uniquely qualified to help us achieve our objectives regarding families, the economy, infrastructure, and government resiliency,” said Mayor Walsh. “She has deep knowledge of the City from two years at NBD and also knows how to improve government performance after more than a decade at one of world’s leading consulting firms. Without question, Jennifer is in the right place at the right time.”

As Director of Strategic Initiatives, Tifft will oversee the implementation of Syracuse’s plan to invest the $123 million in federal pandemic relief provided to the City under ARPA. She will work with the administration, city government departments, and community partners to develop and implement ARPA funded projects. She will coordinate with the Syracuse Common Council on local legislative involvement and oversight of ARPA expenditures. Tifft will also work with city departments and funding recipients to ensure compliance with federal regulations for the program.

In June of this year, after accepting and considering input from a wide range of stakeholders, Mayor Walsh released a comprehensive plan to use ARPA funds to help Syracuse residents recover from the pandemic. Since then, the Mayor and the Common Council have authorized more than $40 million in ARPA investments including projects in the areas of housing, youth employment, small business, water infrastructure, sidewalks, parks, and public safety.

Tifft will continue to guide the Mayor’s Syracuse Surge initiative, which she helped develop when she joined city government in 2019. With Tifft’s involvement, the economic development initiative launched by Mayor Walsh in 2019, has helped rewrite the narrative on Syracuse. The New York Power Authority named Syracuse its Flagship Smart City. New York State committed $12 million to expand the Greater Syracuse Tech Garden and another $74 million to create a regional Science Technology Engineering Arts and Math (STEAM) school at the former Central Tech High School. JMA Wireless is constructing a technology manufacturing plant at a campus on Syracuse’s south side.

Prior to joining City Hall, Tifft worked as a consultant for nearly 13 years at Deloitte Consulting in Washington, D.C. and New York City.  Tifft also worked in legal and policy analyst roles with the New York State Office of the Attorney General and SUNY Upstate Medical University. She has a Master of Public Administration from the Maxwell School of Citizenship and her Juris Doctor from Syracuse University College of Law. She is a graduate of Loyola University Chicago.