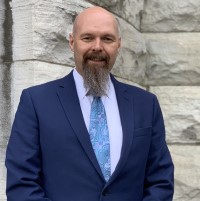 Syracuse, N.Y. – Syracuse Mayor Ben Walsh announced the appointment of Michael Collins as commissioner of the Department of Neighborhood and Business Development (NBD). Collins, currently the executive director of the Syracuse Northeast Community Center, takes on the new City of Syracuse role after a two decade career in education, small business, human services and community development.

“Michael’s extensive experience in management and leadership in the neighborhood, community and human services sectors aligns well with the commissioner duties at NBD,” said Mayor Walsh.  “He has a proven track record of working effectively with government organizations at the local, state and federal levels and deeply understands the challenges in housing, poverty, and accessing jobs and opportunity that face our community.”

Since 2014, Michael has led the Northeast Community Center where he has expanded programming for older adults and basic family needs; increased community engagement; and grown the organization’s involvement in workforce development. He’s also collaborated with the leaders of our other community centers to more effectively serve people in the City.

Prior to joining the Northeast Community Center, Michael was a program director and property manager at Interfaith Works. He played a key role in redesigning the organization’s refugee resettlement housing program.  He also had his own construction business in the City and worked as an elementary school teacher at Meacham Elementary.

Collins serves on multiple key community boards, including Greater Syracuse H.O.P.E, the United Way of Central New York, and Blueprint 15. He is a commissioner of the Syracuse Housing Authority and also served on the boards of Housing Visions Unlimited, the Jowonio School, and It’s About Child and Family. He is a graduate of the State University of New York at Oswego.

“I’m more confident than ever in the progress we are making working together with the Common Council and our many community partners to improve our neighborhoods; disrupt the cycle of poverty; grow jobs and the economy; address lead contamination; and increase affordable housing,” said Mayor Walsh. “I look forward to what Michael and our amazing NBD team will accomplish next.”

Collins, who lives in the Westcott neighborhood, will start in his new role in the beginning of March.