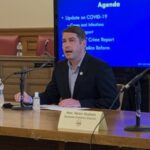 Syracuse, N.Y. – Syracuse Mayor Walsh signed an Executive Order on Syracuse Police Reform today immediately authorizing 16 actions to strengthen police accountability and improve police-community relations. Among the provisions is the enactment of Right to Know protections for citizens that require officers to identify themselves and provides guidance to officers on appropriately gaining consent to certain searches. At a City Hall announcement, the Mayor was joined by leadership and members of the Syracuse Common Council, who pledged to introduce complementary legislation on Right to Know and to advance other police reform measures.

The Mayor’s three-part Syracuse Police Reform Agenda also included a commitment to engage in dialogue with key stakeholders and protests groups and to ensure the City fully complies with Governor Cuomo’s Executive Order 203, known as the Police Reform and Reinvention Collaborative.

“I’ve had no higher priority than strengthening police accountability and police-community relations as mayor, and I am proud of the progress we have made. The message from our community, however, is clear: we want more progress, faster,” said Mayor Walsh. “The 16 provisions in my Executive Order are actions we can implement now, so there is no reason to wait. As we engage in discussions with key stakeholders and protest groups, they will know we are serious. The Executive Order and engagement with stakeholders set the stage for our City to fully comply with Governor Cuomo’s police reform directive.” 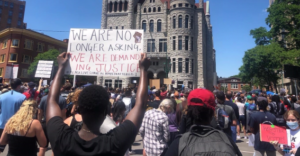 “We are no longer asking”

Provisions in the Executive Order address critical issues in the police reform movement locally and nationally including: updating the Syracuse Police Department’s (SPD) use of force policy; presence of police in schools; deployment of police on non-criminal matters; expanding the implementation of body worn and dashboard cameras; review of “no-knock” warrants; use of surplus military equipment; diversity on the police force; and training for all officers on cultural competency and the history of racism in Syracuse and the nation.

“The Common Council will continue to work with the Administration on implementation whether it is on a policy or legislative level,” said Syracuse Common Council President Helen Hudson. “We will have a Public Safety Committee meeting next week to address and prepare to advance additional reform actions. Right to Know has long been a priority of this Council, and we will take the steps necessary to move it forward.”

The 16 provisions addressed in the Mayor’s Executive Order are:

A summary of other actions by the Walsh administration and the SPD can be found here.