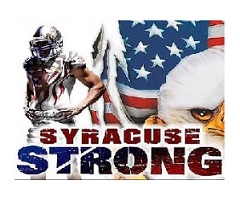 The Syracuse Strong capped off its 2017 season with a 15-6 victory over the Michigan Hurricanes in a bowl game on Jan. 20 in New Orleans, LA. The team finished the season with an overall record of 12-4.

Those in attendance include; Mayor Ben Walsh