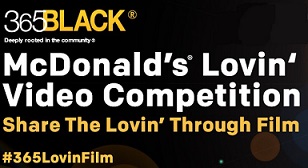 Newark, NJ  Iselin, NJ –McDonald’s USA and the American Black Film Festival joined forces for the first McDonald’s Lovin’ Video Competition. The winner of this year’s competition was Richard T. Fields of Prince George’s County, Md., for his submission, “Puppy Love.” To complement McDonald’s new “Lovin'” campaign, up-and-coming filmmakers were challenged to create one 90-second film displaying their definition of “lovin’.” Fields, along with two other finalists, Brian Shackelford of Los Angeles, CA, and Travis Dent of Baton Rouge, LA, were selected to attend the 19th annual American Black Film Festival in New York City, June 11-14. Critically acclaimed film director, Malcolm D. Lee (Best Man; Best Man Holiday) served as a mentor for the aspiring filmmakers, providing invaluable film industry best practices. The top three short films premiered at the highly-anticipated festival. Each submission was critiqued on creativity, implementation of concept and quality by a diverse panel of industry veterans. Fields was awarded a film equipment package valued at $2,500 and an opportunity to have his film featured on prominent websites, including McDonald’s 365Black.com and other media entities. 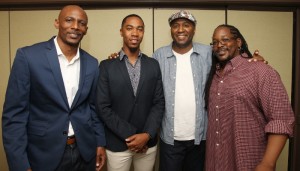 “The McDonald’s Lovin’ Video Competition showcased a group of aspiring filmmakers that otherwise may not have had this type of opportunity to display their vast talents. This inaugural partnership aligns perfectly with our mission to provide platforms for undiscovered directors, producers and writers,” said Jeff Friday, ABFF’s founder/CEO. McDonald’s newest campaign reignites the spirit of love and will inspire everything the brand does moving forward. By focusing on the lovin’ people show each other each day, McDonald’s celebrates lovin’ with its customers. “I am proud that a brand as unique as McDonald’s is able to provide a platform for up-and-coming filmmakers to showcase their talent and spread positive messages that capture the heart of our communities,” said Marty Gillis, McDonald’s U.S. franchisee. “We hope that the idea of sharing love throughout our communities, and beyond, will inspire everyone to get involved in the movement.”

The Lovin’ Video Competition and ABFF’s vision to promote diversity in the film and television industry align with McDonald’s 365Black platform — an initiative that celebrates the pride, heritage and achievements of African-Americans year round. McDonald’s encourages those who live out lovin’ in their lives each day to follow @365Black on Twitter and join the conversation using #365LovinFilm. To learn more about the 365Black initiative and view all of the finalists’ videos, visit www.365Black.com.