Mike Montes is the democratic candidate for Onondaga County Sheriff. Mike brings a wealth of experience to the campaign which includes his extensive resume detailing 27 years of Federal law Enforcement experience. He began his career in law enforcement as a special agent with the United States Customs Service, where he served in tactical airborne narcotics interdictions, in criminal investigations and as a national program manager.  In 2003, Montes transferred to the Department of Defense Inspector General, Defense Criminal Investigative Service (DCIS) as the Program Director for National Security. DCIS is the defense departments’ version of the popularized NCIS. 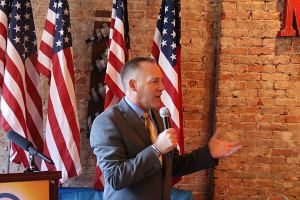 As the Program Director, he provided agency wide oversight of national security investigations, represented the agency with the National Joint Terrorism Task Force, and additionally served on a one-year assignment as the DoD Liaison to the 911 Commission. In 2005, he transferred back to his adoptive home of Syracuse, New York and resides in Manlius, New York.

In 2009, he attended the Naval War College earning a Command and Staff diploma. He has served in numerous active and reserve assignments throughout the world to include deployments to Iraq and Korea. Mike has held several leadership positions which have included tours as the Deputy Director of Intelligence in Baghdad, Iraq, Executive Officer of the Office of Naval Intelligence and Executive Officer of the Defense Intelligence Agency, and most recently was selected as the Commanding Officer of his reserve unit in Rome, NY.  His current rank is a Commander in the U.S. Navy Reserve.

The Navy has leveraged his leadership on four other active duty tours as an Operations Officer of a major intelligence center, a Senior Intelligence Analyst on 2 separate occasions engaged in Counter Threat Finance Analysis of enemy operations, and led a joint military team to curb the threat of Improvised Explosive Devices in the Afghanistan Theater.

Urban CNY: Why do you want to become Onondaga County Sheriff?

Montes: “I want to take my almost 3 decades of service to the nation and bring it back. I want to be able to be in a position where I can tackle a lot of these big issues we that are facing the county that I’ve really been concerned about and to really make a difference in people’s lives. Look at the landscape today, my concern has been, we’ve become a nation that’s so polarized. Several months ago when I was looking to see what I could do, to step up and make a difference.  If you want to make I difference in your community you have to step up, whether that’s volunteering with things or something like what I’m doing, running for political office. Then I looked at, what is my background? What position would fit with that and Onondaga County Sheriff is a position where I have the training, the skills, the education and more than anything, I have the passion to really truly want to make a difference.”

Urban CNY: What would you bring to the job that’s unique?

Montes:  “I’ve not spent my whole career in the sheriff’s office, but I’ve spent my career literally around the world, to include much of that time in Central New York. I’ve deployed to Iraq, I’ve deployed to Korea, that’s on my military side. I’ve led large organizations, but I could see things from a different lens than the current sheriff can.  I have the depth of experience of leading people and I have the Law Enforcement experience. I have everything from the tactical expertise early in my career to more senior positions; I was on a special response team, I was able to see it from a tactical end to the investigative. I’ve done over 1,500 criminal investigations, and I’ve overseen national cases. When I was in Washington, I was the program director for National Security for the Defense Criminal Investigative Service which is under the Department of Defense Inspector General.  I oversaw over 400 agents involved in national security investigations around the country. I can prioritize, see the big picture, and know where we have to put our resources to protect this county. I have the depth of experience that can bring us to a point where I can make a difference. I see it from a really different lens, I don’t have years with of being with one organization, where you don’t see things from a different perspective, where I do.  I’ve been in two federal agencies in my law enforcement career, the U.S. Customs Service and the Department of Defense.”

Urban CNY: Is there anything you would like to add, that our readers may want to know about you?

Montes: “The biggest thing for me is to let people know that I’m going to be present in the community that I’m going to be reaching out to community leaders, as I have throughout the campaign, I will do the same as sheriff. I will be available to talk with anybody at any time. I believe in transparency, and accountability. I’m also deeply, deeply concerned about the issues facing the Onondaga County Justice Center, which is whole other subject, a platform I’ve been running on for a while. The Commission on Corrections, they’re the oversight for the 62 counties in New York state, ruled that the Justice Center was one of the 5 most problematic jails in New York State.

My opponent boasts about receiving this accreditation by the American Correctional Association, which is a private organization, it’s not a regulatory body.  Also, it has cost the taxpayers a significant amount of money to apply for and receive this accreditation.

We got sued for placing 16 and 17 year olds in solitary confinement. We, the county got sued; the sheriff fought the case and lost. A 16 year old spent 404 days in solitary confinement, this is directly out of the federal lawsuit that I’m quoting. We are one of the last counties in the United States that used solitary confinement as a form of punishment.  It is an inhumane practice, and is a form of torture.  The United Nations calls for a ban on solitary confinement of prisoners except in very exceptional circumstances and for as short a time as possible, with an absolute prohibition in the case of juveniles and people with mental disabilities.  This is not a practice that will take place under my watch.

We have to remember that the Justice Center is a place where people are that have not yet been convicted of a crime. If you’re somebody of means, and you get arrested for an offense and get a $500 bail, you write a check and you’re out the door. If you’re someone who’s not of means and you get a $500 bail, you can’t make it and you’ll sit there and wait for the disposition of your case. You could be there for months.

The treatment has been inhumane in some cases, certainly when you talk about solitary confinement. Other things the report cited was overcrowding, understaffed, deplorable conditions and poor access to medical care.

When you are responsible for the jail, you feed them, you clothe them, I don’t mean we should create a five star hotel, but you treat people with dignity. “

Mike Montes has come into the campaign for Onondaga County Sheriff armed with an impressive resume in a race that’s flown below radar, while people are focused on campaigns for U.S. Congress, New York State Senate and Assembly. Montes message is simple; he plans to bring his vast experience to the position with special attention to issues that have plagued Onondaga County Justice for decades.  The question is will enough people hear his unconventional campaign message in time for Election Day to bring about real change at the Onondaga County Sheriff’s Department.