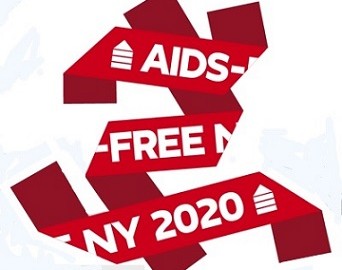 In Its First Year of Work, Mayor Miner’s End the Epidemic Task Force Has Set Goals and Exceeded Expectations of Success

Miner: Syracuse Is Working to Create a City Without HIV/AIDS

SYRACUSE, N.Y. – Mayor Stephanie A. Miner today announced the progress of the City of Syracuse End the Epidemic task force, a consortium of more than 20 healthcare and social service providers working alongside government agencies to reduce new cases of HIV/AIDS by the year 2020. The task force, which Mayor Miner established in late 2015, has connected nearly 600 individuals to care management services, has performed more than 1,500 HIV tests, and helped over 150 individuals gain access to Pre-Exposure Prophylaxis (PrEP) to prevent the spread of HIV/AIDS.

“Since the 1980s, our country and our communities have been ravaged by the scourge of HIV/AIDS. No one can erase the haunting images of fearless men and women suffering from a disease with no known cause and no known cure. We have made such great strides since those dark days and I am proud that Syracuse is working to create a City without HIV/AIDS,” said Syracuse Mayor Stephanie A. Miner. “We have already seen the impressive accomplishments of our End the Epidemic task force, including increasing the number of at-risk people taking PrEP treatments and connecting those with HIV/AIDS to treatment services. I look forward to their continued achievements as we work to end the HIV/AIDS epidemic.”

Significant progress has already been made in Central New York since the beginning of the End the Epidemic task force, with 596 individuals who have HIV/AIDS being linked to healthcare management service, enabling them to have the lifesaving treatments necessary to preserve their quality of life and prevent the further transmission of HIV. The task force has also worked to connect 157 individuals to PrEP treatments, minimizing their risk of contracting HIV/AIDS.

One notable accomplishment is increasing the number of HIV positive people whose condition is considered undetectable—a metric signifying that, after appropriate treatment, that person would be unlikely to further spread the HIV virus. In Syracuse, the viral suppression rate is 72%. 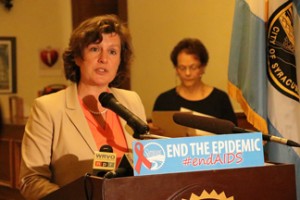 Mayor Miner added, “We have already achieved so much through the End the Epidemic task force and our community is seeing lives saved every day because of their efforts. Their work will continue to make a difference in the City of Syracuse for years to come and I thank those involved in this endeavor for their commitment to ending HIV/AIDS in the City of Syracuse.”

The next major goals of Mayor Miner’s End the Epidemic task force include expanding outreach for HIV testing, including working on seeking more testing at public events and circulating information among high-risk populations about testing services. Partner organizations affiliated with the End the Epidemic task force have performed over 1,500 HIV screenings, representing a 118% increase from the previous year. Additionally, the task force will establish a working group focused on data analytics and evaluation to determine the success of their continued efforts.

The End the Epidemic task force was developed in late 2015 with the cooperation of more than 20 healthcare, social service, and government agencies with the goal of curbing the transmission of HIV/AIDS in the City of Syracuse. Since its inception, the task force has developed a series of four goals to make this goal a reality. Those goals include: identifying people with HIV/AIDS who are undiagnosed; connecting those with HIV/AIDS to healthcare services antiretroviral therapy, suppressing the HIV virus giving the patient a better quality of life and minimizing the risk of further transmission; providing PrEP for people with a high risk of contracting HIV/AIDS; and addressing the structural barriers to HIV/AIDS healthcare, including access to affordable housing, drug treatment, employment opportunities, human rights, and LGBT health issues.