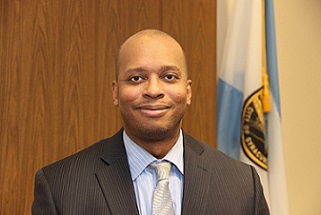 SYRACUSE, N.Y. – Mayor Stephanie A. Miner announced today her intention to appoint Derrek T. Thomas to an upcoming vacancy on the Syracuse City Court. Supervising City Court Judge Stephen J. Dougherty announced his intention to resign his seat effective December 31, 2016 to assume a position as a Judge of Onondaga County Court. Mr. Thomas, 41, currently serves as the Director of Personnel and Labor Relations for the City of Syracuse.

“Derrek Thomas is an excellent attorney who has provided exemplary service to the City of Syracuse in administrative hearings, negotiations, court proceedings and arbitrations,” said Syracuse Mayor Stephanie A. Miner. “His professionalism and demeanor have enabled him to serve the people of the City of Syracuse and he will make a strong addition to the City Court bench.”

“I am honored to be appointed by Mayor Miner to this position and look forward to serving my community in this new way,” said Derrek T. Thomas. “After working for the City for 5 years on the issues facing our community, I look forward to joining my new colleagues on the bench to continue public service this new way.”

Mr. Thomas currently serves as the Director of Personnel and Labor Relations for the City of Syracuse, a position to which he was appointed in 2013. As the Director, he served as the City’s chief negotiator for all organized labor contracts. Prior to that, he served as an assistant corporation counsel handling labor matters for the City of Syracuse beginning in 2011. Mr. Thomas has worked as an attorney with Turning Stone Resort Casino LLC/Oneida Indian Nation LLC, the Mackenzie Hughes law firm and the New York State Bill Drafting Commission. Thomas earned his undergraduate, MBA, and law degrees at SUNY Albany and Albany Law School. Mr. Thomas and his wife live on the City’s North Side with their children. Mr. Thomas currently serves on the boards of the Syracuse Model Neighborhood Facility and the Syracuse Housing Authority.