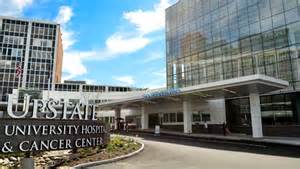 SYRACUSE, N.Y. – On June 7th, Mayor Stephanie A. Miner sent a letter to the leadership of SUNY Upstate Medical University and the SUNY Administration urging the Downtown Syracuse teaching hospital to enter into a service agreement with the City of Syracuse. Last week, SUNY Upstate reported a profit of $120 million and its philanthropic arm, the Upstate Foundation, Inc., has a fund balance of $89.1 million. The hospital pays no taxes on its property in the City of Syracuse which is assessed at over $222 million. 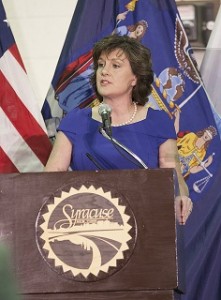 “SUNY Upstate enjoys the benefits of expensive City services, including police and fire protection, road maintenance, and snow removal but pays nothing in taxes. This leaves the rest of Syracuse residents, some of whom live in extreme poverty, to subsidize the operations of this successful institution,” said Syracuse Mayor Stephanie A. Miner. “I believe that the futures of the institutions we represent are inextricably entwined and I hope that you, the leaders of SUNY Upstate Medical University, its Foundation, and SUNY Administration, give serious consideration to entering into a service agreement with the City of Syracuse. Fairness demands it.”

Mayor Miner has worked with other large non-profits in the community to enact service agreements. Most recently, the Mayor announced a five year agreement with Syracuse University which resulted in $4.5 million to fund the City’s general services over five years and $2.5 million to support neighborhood organizations. Previously, the Mayor had also announced a service agreement with Crouse Hospital which resulted in four annual payments of $50,000 to the City and another deal with Syracuse University in 2011.

Miner’s full letter to the SUNY officials appears below: 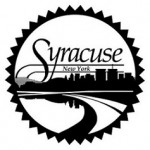 I write to you today about a matter of fairness.

SUNY Upstate Medical University, our area’s largest employer, enjoys a multitude of costly services provided by the City of Syracuse. These include but are not limited to: police and fire protection, road maintenance and repaving, traffic control, and snow removal. Because of its tax-exempt status, SUNY Upstate pays nothing for these services (in fact, more than 50 percent of property within the City of Syracuse is tax exempt). Instead, Syracuse’s increasingly hard-pressed residential and commercial taxpayers are forced to heavily subsidize SUNY Upstate’s operations. The contrast is striking:

More than one-third of city residents live in poverty, whereas SUNY Upstate recently reported a record profit of $120 million.

Syracuse is the 23rd poorest city in the nation, yet The Upstate Foundation, Inc. reported a fund balance of $89.1 million as of December 2014.

Our city has the highest rate of extreme poverty concentrated among blacks and Hispanics of any of the nation’s 100 largest metropolitan areas, however institutionalizing university-community engagement, i.e. formally helping host communities is supposedly one of SUNY Administration’s hallmarks.

Our city’s pension costs have grown by 36% since 2010 and over the last decade our health care costs have grown by 84% to approximately $44 million. We struggle with costly maintenance and repair of aging infrastructure like 100-year-old water mains that instead of rupturing only in winter now break year round. While state aid has dropped in real terms since the Great Recession, long-promised mandate relief has yet to materialize.

Despite these pressures, my administration has made the tough decisions necessary to stabilize the city’s finances. We have reduced our workforce by 10%, required employees to contribute more for their health care, and consolidated and shared services with Onondaga County. The Office of the State Comptroller and bond rating agencies have repeatedly affirmed our sound fiscal management and rewarded our efforts with stable, positive ratings.

Another positive step that Syracuse has taken is entering into voluntary service agreements with large tax-exempt institutions to defer the expense of costly services. Though rare nationally, two of our area’s five largest employers, Syracuse University and Crouse Hospital, have entered into such agreements with the city.

For example, just this April, Syracuse University extended and enhanced a prior service agreement that will provide $7 million over five years to support general services and fund university-area neighborhood organizations.

I believe that the futures of the institutions we represent are inextricably entwined and I hope that you, the leaders of SUNY Upstate Medical University, its Foundation, and SUNY Administration, give serious consideration to entering into a similar service agreement with the City of Syracuse. Fairness demands it.

Thank you for your attention to this matter and I look forward to discussing details at your convenience.

Stephanie A. Miner
Mayor of Syracuse