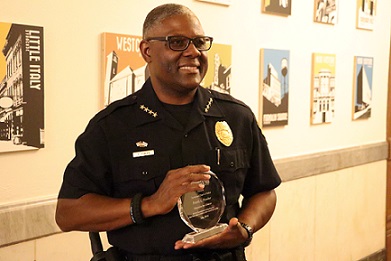 This Marks the Second Time Chief Fowler Has Received this High-Profile Award from the 5,000 Member Organization, a First in their History

Miner: Chief Fowler is a Leader Not Only in Fighting Crime but Addressing Its Social, Economic, and Environmental Causes

SYRACUSE, N.Y. – Mayor Stephanie A. Miner today joined representatives from Fight Crime: Invest in Kids to present Syracuse Police Chief Frank L. Fowler with the organization’s “Champion of Children” Award, recognizing the Chief’s work educating policymakers and the public about how research shows that investing early in a child’s life is actually a crime prevention tool. The award, given annually by Fight Crime: Invest in Kids, has never been given to the same person two years in a row.

“Chief Fowler has been an outstanding leader for our community, not just in fighting crime where it happens but working on the social, economic, and environmental causes of crime. I am grateful to have him on our team and excited that he is being recognized with this special honor,” said Syracuse Mayor Stephanie A. Miner. “Fight Crime: Invest in Kids works with law enforcement organizations across the nation and I am pleased they have chosen to recognize Chief Fowler and the Syracuse Police Department’s ongoing efforts to invest in our next generation.”

“I’m honored to be recognized by other leaders in law enforcement for the work we’ve done in the Police Department to make the lives of Syracuse’s children better,” said Chief of Police Frank L. Fowler. “Giving children the right opportunities is critical in making sure we can have safer, healthier community in the future.”

Jenn O’Connor, the New York State Director of Fight Crime: Invest in Kids said: “Chief Fowler has gone above and beyond in his role as co-chair of Fight Crime: Invest in Kids. We applaud his dedication to children and families and his willingness to step up and share the important message that home visiting, early learning, and high-quality afterschool programs help prevent crime.”

Fight Crime: Invest in Kids is a national organization of over 5,000 law enforcement leaders – chiefs of police, sheriffs, district attorneys and crime survivors, with 250 members in New York State. Each year, the organization presents three “Champion for Children” awards to a Chief of Police, a Sheriff, and a District Attorney. This award is given to recognize the time and efforts of dedicated members to educate policy leaders and members of the public about the importance of how early investments in children make a difference in communities and can put young people on the right path in life. Chief Fowler, who serves as a co-chair of Fight Crime: Invest in Kids New York, is the first person to be given this award two years in a row.