Officers Have Undergone Training at the Academy Since August, 2014 32 New Officers are one of the Most Diverse Classes to Join Syracuse Police Department in History

SYRACUSE, N.Y. – Mayor Stephanie A. Miner and Chief of Police Frank L. Fowler presided over the graduation today of 32 the Syracuse Regional Police Academy. Of the graduating class, 32 new officers will join the Syracuse Police Department. This new class, announced by Mayor Miner during the release of the 2014-15 City budget, represents one of the most diverse classes of officers ever to join the Department.

“This is a momentous occasion in the lives of these young men and women as well as an important day as we add 32 new officers to the Syracuse Police Department,” said Syracuse Mayor Stephanie A. Miner. “I look forward to welcoming these new recruits to the force as they begin their careers serving and protecting the people of the City of Syracuse.”

The new group of officers joining the Syracuse Police Department represents one of the most diverse groups to join the force. In this class of 32 officers, five are female, three are Hispanic, four are African-American, one is a Native American. Additionally, six of the new officers are military veterans. 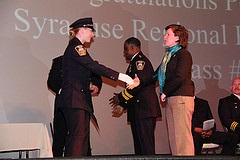 Awards were also presented to members of the class. The awards honored achievement in physical fitness, academics, emergency vehicle operations, defensive tactics, and firearms. An award was also given to a class leader and a most improved graduate.

In addition to the 32 officers from the Syracuse Police Department, officers from nine other local law enforcement agencies will graduate from the academy. A full list of graduates appears below. 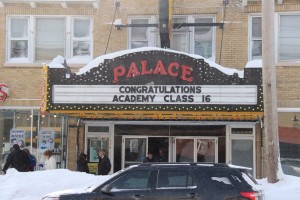