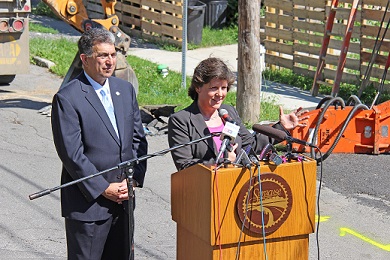 Miner Has Been Advocating On State, Federal Level for Additional Funding for Critical Infrastructure Projects for the City of Syracuse

SYRACUSE, N.Y. – Mayor Stephanie A. Miner and Assemblyman William B. Magnarelli announced July 23rd, $10 million in state funding secured for infrastructure projects in the City of Syracuse. The funding was secured by Assemblyman Magnarelli in this year’s budget from the NYS Assembly’s State and Municipal Facilities Program (SAM). The Mayor and Assemblyman made the announcement standing at the site of a water department work site at 121 Nelson Street in the City of Syracuse.

Syracuse Mayor Stephanie A. Miner said: “From road reconstruction to water mains and much more, the City has critical infrastructure needs. While much work remains and I will continue to advocate to our leaders in Albany and Washington for additional funding and solutions to our infrastructure needs, this will certainly make a difference in our community. I am pleased that Assemblyman Magnarelli was able to obtain this money which will help make needed repairs.”

Assemblyman William B. Magnarelli said, “Syracuse, like other urban centers throughout New York State and the nation, is experiencing critical needs for infrastructure repairs and upgrades. After speaking with Mayor Miner, I secured through the New York State Assembly $10 million to assist the City of Syracuse with its infrastructure needs. I feel confident that $10 million will jump-start some of the most critical areas in the city’s infrastructure and I am committed to advocating for additional funds in the future.”

The Mayor has directed the staff in the newly-created Mayor’s Office of Innovation to work collaboratively with the Department of Water and Department of Public Works to find priority projects where the money can be spent most efficiently to maximize its value.

The City of Syracuse has wide-ranging infrastructure needs. In 2015 to date, the City has experienced 251 water main breaks. In 2014, the City had a record 391 water main breaks. The City’s unique water system takes water from Skaneateles Lake and, through a gravity-fed system, into the City of Syracuse. Owing to the natural purity of Skaneateles Lake, the City has a filtration waiver from the Environmental Protection Agency. It was built in the late 1800s and today continues to use cast-iron pipes from that era. 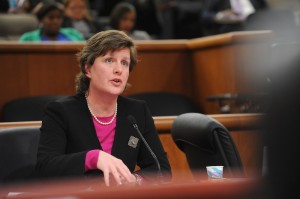 Mayor Miner has made raising awareness of infrastructure issues a top priority of her administration. The Mayor has testified before the New York State Legislature and submitted testimony before the United States Senate detailing the needs of the City. Most recently, the Mayor met with New York State Assembly Speaker Carl Heastie and Assemblyman Bill Magnarelli and focused their conversation on infrastructure issues. The Mayor has also met with Members of Congress to discuss the City’s needs. Mayor Miner has attended the Clinton Global Initiative in Denver, Colorado to discuss solutions to state and local infrastructure issues.