SYRACUSE, N.Y. – Mayor Stephanie A. Miner announced today since mounting GPS enabled equipment on Department of Public Works (DPW) DuraPatcher trucks in April, the City of Syracuse has filled over 3,260 potholes. This is part of advancements in data technology currently being implemented by the Miner administration, seeking to link infrastructure-related decisions to data and statistics.

“I am proud of the work Syracuse DPW crews do every day to make sure we have safe and quality streets. I am equally proud to have the opportunity to implement new technologies so we can make smarter decisions based on data, stretching our dollars further and providing better service to our residents,” said Syracuse Mayor Stephanie A. Miner. “Filling over 3,000 potholes in this short span of time is an important service to our community, but it is equally important that we can better document this work. That gives us a better overall understanding of the quality of our streets and helps us determine what our maintenance priorities need to be.”

The City’s improved approach to road work takes three steps and each is reliant on data: reporting, researching, and repair. Citizens are now able to report service requests to the City more easily. The CityLine service request hotline continues to be available at 448-CITY during normal business hours for those with questions, concerns, or issues. CityLine has recently expanded, enabling residents to submit service requests on Twitter using the handle @SYRCityLine. Additionally, service requests can be entered directly into the City’s IPS service request system, where users will be given tracking numbers to follow the status of their requests. That can be accessed at cityline.syrgov.net. 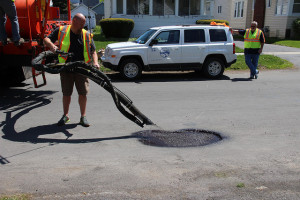 City crews will now be better armed with data about where street issues are occurring. Mayor Miner recently announced the City would partner with New York City-based startup ARGO Labs to use Street Quality Identification Devices, known as SQUID, which can be mounted onto the back of a DPW truck. Fitted with a small camera and accelerometer, these devices can record the texture of the roads while simultaneously taking photographs to determine where potholes may exist.

Once the DPW has been notified of potholes, they dispatch a DuraPatcher truck to an area to repair potholes. With new GPS-enabled devices mounted on these vehicles, crews are able to track exactly how many potholes they fill rather than just reporting they completed a service request or addressed a general area.

Mayor Miner added, “With these advancements, we can better plan our infrastructure improvements and address these key quality of life issues for all Syracusans. I would encourage residents to call, log-on, or tweet us whenever they see a pothole so we can keep our roads in good condition.” 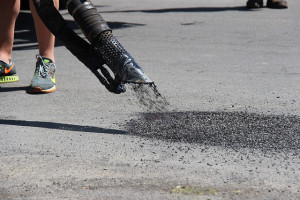 One of 3,000 Potholes Filled Since Mid April

SQUID and GPS-enabled devices are initiatives researched by the staff of the Mayor’s Office of Innovation, in support of the Department of Public Works. The i-Team’s work, since it was launched in 2015, has focused on finding new and creative ways to address the infrastructure challenges faced by the City of Syracuse.

The Mayor has made addressing infrastructure issues a major priority of her administration. Last year, the Mayor announced $10 million in funding from New York State to address water and road infrastructure. Included in the state funding was $800,000 to be used for infrastructure technology, which is helping to support the deployment of these sensors.

Today’s announcement marks the third day of Infrastructure Week, a national effort to raise the profile of infrastructure issues facing cities. On Monday, Mayor Miner attended a kick-off event in Washington, DC. And on Tuesday she led a tour of the Water Department’s Skaneateles Gatehouse.