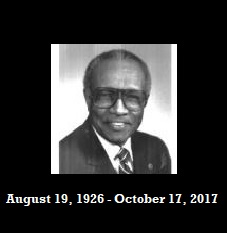 We’ve been saddened to learn that Leon E. Modeste, long time President and CEO of the Onondaga County Urban League in Syracuse, has passed away, his obituary is printed below as it appeared in The Gainesville Sun from Oct. 26 to Oct. 27, 2017.

He will be missed by the Syracuse community who remember the Urban League and the important work that was accomplished by the agency. The Urban League under Modeste was unflinching in its support and defense of the Black Community of Syracuse. He didn’t have to order a spine from Amazon Prime; he arrived here in Syracuse, equipped with a backbone.

Mr. Modeste didn’t hold his tongue when he called out local leaders who weren’t paying attention to conditions that affect the African-American community of Syracuse and Onondaga County. Leon sounded the warning alarm about poverty levels which in 1994 were clustered in the Near Westside. Leon Modeste, headed the league from 1979 to 1994.

Unfortunately, the Onondaga County Urban League lost funding from a variety of local sources and the agency never recovered. Since the time of its closing, the area has not had an advocate on the level of Modeste, who spoke “Truth to Power”.

Some may recall when Leon made a special trip to Syracuse in June of 2007. At the time, he donated pictures, papers and other documents pertaining to the civil rights group to the Beauchamp Brach of the Onondaga County Public Library.

Leon E. Modeste transitioned from his earthly body to his heavenly home on October 17, 2017 with his wife Pinky at his side. He was born on August 19, 1926 in Brooklyn, New York, the eldest of five children born to the late Leon B. Modeste and Hattie H. Modeste. His brothers Bernard and James and sister Edna preceded him in death. ‘Moe’, as he was affectionately known, graduated from Long Island University in Brooklyn and subsequently earned the Masters of Social Work from Columbia University. He was an ardent member of Greater Grace COGIC in Albany, GA until his health failed him, and a Veteran of World War II.

Modeste’s tenure as an executive with the National Urban League spanned more than 18 years. He distinguished himself as an advocate for social and economic justice in helping the underprivileged. Modeste began his Urban League career as CEO of the Brooklyn Affiliate where he is mostly remembered for organizing the Black United Front with Rev. Herbert Daughtry, as well as many rallies and civil rights demonstrations. Later Modeste was appointed by Vernon Jordan, then President of the National Urban League, to become President and CEO of the Onondaga County Urban League in Syracuse, NY.