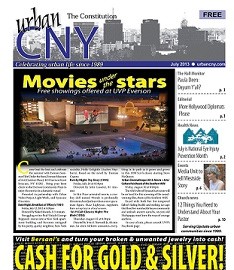 Come beat the heat and celebrate the summer with Everson Summer Films under the Stars. Everson Museum of Art (Outdoor Plaza), 401 Harrison Street Syracuse, NY. Participants are encouraged to bring lawn chairs to the Everson Community Plaza to enjoy the movies in a fantastic venue! Presented in partnership with Urban Video Project, Light Work, and Syracuse Oncenter.

Sci-Fi Cult Classics Night: The Blob (1958)
Thursday, August 15 at 8:30pm
Directed by Irvin S. Yeaworth Jr., 82 minutes
An alien lifeform consumes everything in its path as it grows and grows in this 1958 Sci-fi classic starring Steve McQueen.

The who’s who of Syracuse’s art scene will be on hand for this screening of the award-winning film, Beasts of the Southern Wild.

Faced with both her hot-tempered father’s fading health and melting ice-caps that flood her ramshackle bayou community and unleash ancient aurochs, six-year-old Hushpuppy must learn the ways of courage and love.