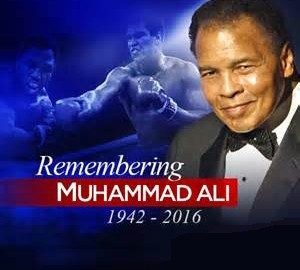 Our collective hearts saddened as new of the death of Boxing legend Muhammad Ali reached us. The Parkinson’s disease had robbed him of his voice and motor skills, yet he made appearances spending his time doing good deeds for others. He defied all odds to win the heavyweight championship 3 times, despite being banned from boxing at his prime, due to his conscientious objection to the Vietnam War.

His wit captivated audiences since they’ve never seen a man like this. He spoke, he rhymed, and he generated excitement in and outside the boxing ring.

When we look back at the life of Muhammad Ali, one can’t help but smile when remembering his razor sharp ability to speak defiantly to the cameras, “I’m a bad man” and the audience loved it.

But there was not always love for the man regarded as, “The Greatest”. He characterized his disgust for the Vietnam War, while the war was popular with the American people.

Muhammad Ali was drafted in 1966 and called up for induction in 1967. His refusal made it all the way to the Supreme Court, which overturned his conviction. At the time, Ali explained why he would not be enlisting to fight in Vietnam:

“Why should they ask me to put on a uniform and go ten thousand miles from home and drop bombs and bullets on brown people in Vietnam while so-called Negro people in Louisville are treated like dogs and denied simple human rights?

No, I am not going ten thousand miles from home to help murder and burn another poor nation simply to continue the domination of white slave masters of the darker people the world over. This is the day when such evils must come to an end. I have been warned that to take such a stand would put my prestige in jeopardy and could cause me to lose millions of dollars which should accrue to me as the champion.

But I have said it once and I will say it again. The real enemy of my people is right here. I will not disgrace my religion, my people or myself by becoming a tool to enslave those who are fighting for their own justice, freedom and equality…

If I thought the war was going to bring freedom and equality to 22 million of my people they wouldn’t have to draft me, I’d join tomorrow. But I either have to obey the laws of the land or the laws of Allah. I have nothing to lose by standing up for my beliefs. So I’ll go to jail. We’ve been in jail for four hundred years.”

Through the life of Muhammad Ali, we can observe the elements of Race, Culture and Athletics Collide.

There were people who hated Ali, veterans groups and others who were not in his corner. It took years, but over time he became a beloved icon in America. A feat long achieved around the world, as possibly the most recognizable American.

Then there was that stunning surprise appearance of Muhammad Ali, lighting the Olympic Torch, during the opening ceremony in Atlanta. Suddenly, the world caught up with this sports icon whose views and stances were well before their time.

He was Muslim, first through the Honorable Elijah Muhammad’s Nation of Islam and later in life becoming a Sunni Muslim.

His message became universal, more about mankind and how important love was to the world.  When asked how he would like to be remembered his reply was as follows:

“I would like to be remembered as a man who won the heavyweight title three times, who was humorous, and who treated everyone right. As a man who never looked down on those who looked up to him, and who helped as many people as he could. As a man who stood up for his beliefs no matter what. As a man who tried to unite all humankind through faith and love. And if all that’s too much, then I guess I’d settle for being remembered only as a great boxer who became a leader and a champion of his people. And I wouldn’t even mind if folks forgot how pretty I was.”