The evening was a combination of celebration and activism complete with a silent auction and music by DJ Maestro, creating an intimate familiar sound reminiscent of gathering with family and friends. Several elected officials’ in attendance including Syracuse City Court Judge Thomas, Mayor Ben Walsh who was accompanied by his wife, Lindsay.  In the arena of politics, in attendance were 24th Congressional District Candidate Dana Balter and NYS Senate Candidate Rachel May. 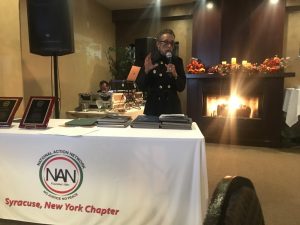 After an excellent diner was served the program began with a message from Syracuse Chapter President, Twiggy Billue. Throughout the evening we were reminded of how many people it takes to bring about community action. Recognizing the need to increase their ranks, and as with any organization, bring in young members so that they’re prepared when it’s their time to As Ms. Billue stated, “Take their rightful place in leadership”.

This Year NAN presented their 1st annual TRIUMPH AWARDS- Syracuse Chapter Triumph Awards honoring those local who have made a positive impact beyond their performance on stage, in the arts, in the community, and in their respective professions. 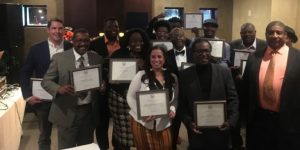 National Action Network leadership is constantly preparing for the future, as emphasized with their recognition of young people.

Male Artist: Truth Speaker Mahkai Bailey and Female Artist P-Salty; young people doing great work in the Syracuse community. And as with many of our young people all involved with NAN the evening are multi-talented, therefore what they received awards for is just a tip of the proverbial iceberg. These are representative of a few of many of our young people who are making positive change quietly, without recognition.

And what would we do without live music as NAN honored in Music: Hollis Mathis / Reggie Seigler for Jams Cookout; the group has steadfastly promoted the advancement of local bands. From Showcase Sunday’s to the New York State Fair these groups of local artists have expanded the recognition of the value of local bands that are now performing at events throughout the region. 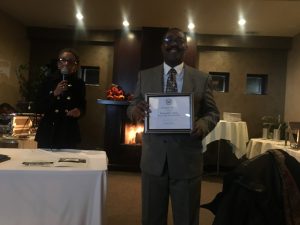 In Print Media/Online Media – Kenneth Jackson URBAN CNY, publisher of urbancny.com since 1989 through both print and digital media. Providing Syracuse Press Club Award Winning coverage of the Ben Walsh Campaign for Syracuse Mayor and providing prospective and context to the perceived battle between Price Rite and Nojaim’s: Is there a Civil War in the Community?

It was also made clear that the organizations motto, “No Justice, No Peace” does not preclude them from holding anyone in power accountable for their actions and how it may impact their constituency. 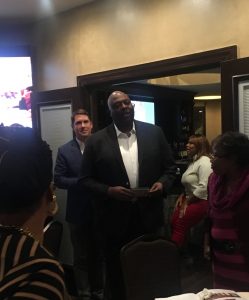 An unexpected surprise came with the appearance and introduction by Mayor Walsh, of Syracuse’s newly appointed Police Chief Kenton Buckner.

In his brief words to those assembled emphasized the magnitude of the challenge clearly indicating, “There are going to be some difficult times ahead as we deal with these issues.” The appearance was met with a plea from NAN, “If you see something, say something” emphasizing that the community plays an important role in creating and supporting safe neighborhoods.

Simultaneously, it was made clear that law enforcement will be held accountable if something becomes an issue moving forward. But for this evening, there was a standing ovation welcoming Kenton Buckner to Syracuse.

The Syracuse Chapter of the National Action Network is committed to bringing their current membership numbers to 125 by November 2019.  They’re asking for community support for their Chapter by becoming a member today!   If you have any questions please do not hesitate to contact Patricia Allen at msbrsuga@aol.com