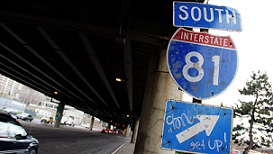 Syracuse Chapter of N.A.N. Supports Goals and Views of Save81.org

SYRACUSE, N.Y. – The Syracuse Chapter of the National Action Network formally went on record opposing the boulevard concept at a meeting January 16th.  As the same time, N.A.N. endorsed the goals and views of the Save81.org organization, and applauded Save81.org’s efforts to help the people most affected to be heard.

“Given the enormity of this I-81 decision, we are concerned that the concerns of the nearly 9,000 residents of Syracuse’s south side will go unheard during this process. Living in the shadow of I-81’s current footprint, they will be directly affected by I-81’s future.  N.A.N. believes Save81.org is asking the right questions about the future of Interstate 81 in the Central New York region, and we’re proud to support the coalition’s efforts,” said Walt Dixie, President of the Syracuse Chapter of the National Action Network.  “The I-81 project will play a major role in shaping the region’s infrastructure for generations to come, and it is important that all of the concerns raised by N.A.N. and Save81.org are fully analyzed by decision-makers.”

The Syracuse N.A.N. Chapter and Save81.org agree that a proposal to replace Interstate 81 in midtown Syracuse with a street-level boulevard would downgrade the health, safety and livability of the City’s neighborhoods while jeopardizing the region’s accessibility, environment, public safety and economy.

N.A.N. members are concerned that downgrading I-81 down to a street-level boulevard would increase traffic congestion and air pollution, endanger pedestrians and hurt the economy, especially in City neighborhoods where many N.A.N. members live.  “We need to make sure our concerns are not left out of such an important discussion,” said Dixie.

N.A.N. agrees with Save81.org that any decision regarding I-81’s future in the area must consider the long-term economic impact on the community and must not jeopardize the ease of travel, public safety and the environment in the region.

“As community leaders in these neighborhoods, we know firsthand that many residents have anxiety about the prospect of replacing I-81 with a street-level boulevard, which will likely need more than six lanes to handle all of the traffic.  They worry that a boulevard will negatively affect their safety, health and overall quality of life”, said Dixie, “Indeed, a boulevard would jeopardize our community’s safety.  Many residents of the Pioneer Homes and Toomey Abbott Towers developments walk to get around. Bringing traffic down from I-81’s elevated path to a ground-level boulevard increases the risk of pedestrian and motor vehicle accidents.

“This is especially concerning for the elderly and disabled residents living and walking in these areas. The young children in our area who are frequently on foot waiting for school buses, visiting friends or accompanying parents are also vulnerable. With more than 500 children living in Pioneer Homes alone, the risk of a child getting hit while trying to cross a busy, traffic-congested boulevard is too high.

“Moreover, an increase in idling vehicles at numerous traffic lights along a boulevard would mean more air pollution in our neighborhood, exacerbating illnesses for our neighbors who already suffer from respiratory issues.”

City neighborhoods have developed and grown around the I-81 viaduct, and have a history of their own.  Toomey Abbott Towers is the third largest building in the city of Syracuse.  Pioneer Homes is one of the nation’s oldest public housing developments.

N.A.N. members recognize that a street-level boulevard would require a wider footprint than that of the current elevated highway, putting this housing at risk and displacing residents.

Moving forward in 2014, N.A.N. plans to work closely with Save81.org to ensure that the voices and concerns of all community residents are heard and that the leaders choose a plan for I-81 that benefits the entire Central New York region.