Charlie Cook: Don’t Expect a Contested Election, Biden has a 90% chance of winning, according to FiveThirtyEight’s forecast

FiveThirtyEight, sometimes rendered as 538, is a website that focuses on opinion poll analysis, politics, economics, and sports blogging. This website and The Cook Report are two measures of what’s going on in the election. Presidential, State and Congressional Polling’s tracked. From these numbers’ predictions, or simply snapshots of the electorate are formed.  The following is from FiveThirtyEight and their assessment of the election as of November 2nd 2020. While they missed Clinton’s 2016 loss, they did note the softening of her support as the campaign headed into the last weekend of the election.

But that doesn’t mean there isn’t still a path for Trump. A 10% chance of winning is roughly the same as the odds that it’s raining in downtown Los Angeles. And, yes, it does rain there.

We’re now a day away from Election Day, which means: 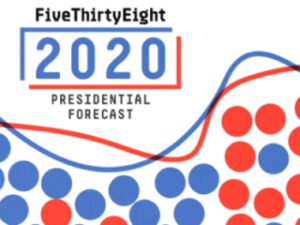 The final prediction by FiveThirtyEight on the morning of election day (November 8, 2016) had Hillary Clinton with a 71% chance to win the 2016 United States presidential election,[68] while other major forecasters had predicted Clinton to win with at least an 85% to 99% probability.[69][70] FiveThirtyEight’s model pointed to the possibility of an Electoral College-popular vote split widening in final weeks based on both Clinton’s small lead in general polls, but also on Trump’s improvement in swing states like Florida or Pennsylvania, mixed with Clinton’s poor performing in several of those swing states in comparison with Obama’s performance in 2012.[71] The main issues pointed out by the forecast model was the imbalance of Clinton’s improvement in very populated states like Texas, Georgia (projected safe for Republican) and California (projected safe for Democrats);[71] mixed with her inability to attract white voters without a college degree, an increasing demographic in swing states, in addition to a potential decline in turnout from minorities.[72] In consequence, Clinton’s probabilities to win the Electoral College were not improving.[71] Silver also focused on state-by-state numbers in so-called ‘must-win’ states like Ohio and Florida, plus a consideration of polls’ margin of error in advantages of less than three points.[73]

Donald Trump won the election. FiveThirtyEight projected a much higher probability of Donald Trump winning the presidency than other pollsters

The Cook Political Report is an independent, non-partisan newsletter that analyzes elections and campaigns for the US House of Representatives, US Senate, Governors and President as well as American political trends. 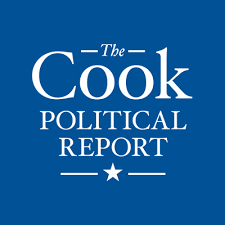 On a hundred-odd Zoom meetings, webinars, and conference call speeches that I’ve participated in over the past two months, virtual attendees continue to raise the possibility of a contested presidential election, even though the chances of that have been getting smaller all the time. Every day that Trump remains behind in the polls, outspent badly and with the early vote gushing in, the cone of uncertainty narrows, and the odds of such an upset goes down.

Joe Biden’s path to 270 electoral votes seems pretty straightforward: Hold all 20 states (plus the District of Columbia) that Hillary Clinton carried four years ago, which total 232 electoral votes, just 38 short of the majority threshold of 270. Then win each of the three states that Clinton lost by eight-tenths of a point or less: Michigan (0.2 percentage points) Pennsylvania (0.7), and Wisconsin (0.8). That gives him 278 electoral votes, eight more than needed. Biden will likely also carry two congressional districts that eluded Clinton in 2016, Nebraska’s 2nd District and Maine’s 2nd, giving him 280 electoral votes. That would represent a “skinny” Biden win….continued