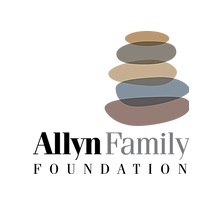 On the surface, this sounds like a good idea. Redefine a major urban area that’s suffering from concentrated poverty, infuse it with investment and the community lives happily ever after, neighborhood poverty, poof gone! Like using dish washing detergent Dawn on an oil spill covered Gosling, poverty is eliminated from the city’s urban core. With great fanfare the Allyn Foundation’s Blueprint 15 project was announced, and at its core is the elimination of Pioneer Homes, Syracuse Housing Authority Project circa 1938, along with other SHA owned properties including McKinney Manor.

Once complete the area will no longer be a housing project, but transformed into a neighborhood with single family homes and mixed use development as properties are sold. SHA property has high value given their close proximity to an expanding Upstate University Medical Hospital and Syracuse University. 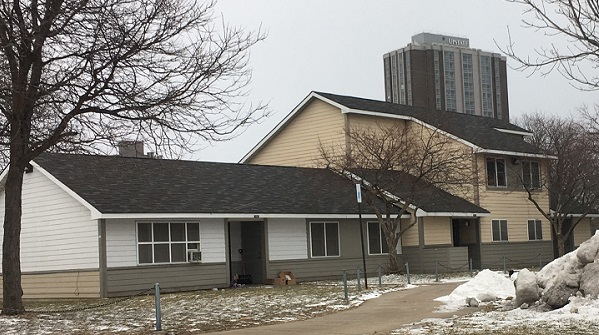 When it comes down to this future plan of Syracuse, the Allyn Foundation is not inclusive of the community they claim they’re hoping to empower. People have been meeting and have known about this project and not sharing the information with the community.  Perhaps, we are not to know at this point, there might be questions. Elected and non-elected stakeholders have been planning and meeting for an extended period of time to bring this plan into fruition and only at the end is the community invited in for a peak at the future.

This is not the first project to pop- up, nor is the Allyn Foundation alone in sequestering information; there appears to be a pattern where the most impacted find out about these projects last. Not that they don’t have individuals from these impacted areas sitting around the table. But as we’ve learned from past practices, not all interests are invited nor welcome when reinventing the city of Syracuse. $100 million plan would turn Syracuse public housing into neighborhood for all

I wish I could write about more details of this massive plan.  Perhaps residents could pay $19.95 for access to the information as given to the Post-Standard online? In a city that acknowledges it has issues with internet access, we have to pay to get details on what’s going on, in one of the least digitally connected sectors of our community. For those who weren’t able to access it, i will save you the trouble, in the P-S article Pioneer Homes is called, “worn-out, depressing stacks of apartments.”

What i don’t like as a writer and journalist is when a public official lies to me. People were disavowing knowledge of this plan until they were reminded of meetings they attended or trips out of town that are planned. (Yes, I know about the excursions).  Don’t believe those who say they didn’t know, because they did. It’s when these plans see light, that people start scurrying like urban warrior cockroaches.

The Blueprint 15 evokes memories of the combined Urban Renewal and Interstate 81 projects; and the adverse impact these urban improvement programs had on the African-American population of Syracuse.

Not being privy to information, reinforces the stereotype that these plans are merely a creative way to move the poor away from the center of Syracuse. “They’re trying to replicate the old 15th Ward with single family houses” according to published reports. The 15th Ward was an eclectic neighborhood with multi-unit, single family and mixed used buildings, replicating it with single family homes is creating a different kind of community, not the 15th Ward.

Blueprint 15 in a nutshell, removes the oldest public housing project in New York State, replaces dwellings with market rate rents in new structures. This is an updated version of Urban Renewal, which begs the question, is this Negro Removal 2.0?

The most valuable property in Syracuse is in and around Syracuse University, along the Connective Corridor and properties south of Adams Street.  Educational Institutions and real estate developers are salivating over future development opportunities that will come through that sale and redevelopment of Syracuse Housing Authority property.

Therefore, Syracuse Housing Authority as property owner can raise lots of money by reinventing itself, selling off valuable portions of their holdings, like Sears.

Yep, I said it, think of Syracuse Housing Authority as Sears Holdings; Craftsman and Kenmore as their urban core properties. Which, by-the-way happen to be extremely valuable to developers. Developers will have a Kmart inspired, Shop Your Way method to acquire and bejewel properties that have been home to public housing residents since 1938.

In 1979 as an Ithaca College senior, I remember reviewing plans signed-off on, by almost the entire community for the construction of Interstate 81 and Syracuse’s Urban Renewal Plans. As part of the massive combined plan, there were promises made that people would be returned to the same neighborhood. Promises made, regarding the upgrade of educational institutions; promises made to upgrade of the lives and prospects for the residents living in an impoverished community. Sound familiar?

Community stakeholders, including not-for-profits that will benefit financially have been spirited out of town to see this concept in action, in Atlanta, Georgia.  Over the last 50 years, we’ve gone for all kinds of economic development plans that have worked in other places, but never quite caught on in Syracuse.

In the African-American community we end up with the Dollar Tree version of any extensive revitalization plan.

Remember, Kennedy Square, Cherry Hill and two 19 story towers and Mulberry Square, all were built to mitigate the loss of housing taken by bulldozers to make way for what was described as “city of the future”. It took decades to rebuild housing stock of the area. Once rebuilt, Kennedy Square was allowed to deteriorate and then deemed unfit for housing. Within 30 feet of the Kennedy Square site, a tax credit driven, community-in-a-box has risen with rents of $1,500 per bedroom. In fact, throughout Syracuse rents have risen at a rapid pace, ahead of Rochester and Buffalo.

Remember the promises made by Destiny USA to build a world class attraction in exchange for 30 years in property tax abatements? We were shown giant spires of green renewable propaganda. 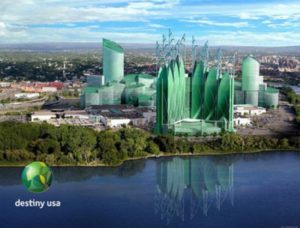 Destiny USA promise to the community netted a multiple decade tax deal. This is not what we got.

The State of New York under Governor Cuomo, over 500 million dollars has been allocated towards rebuilding Central New York “From The Ground Up” and yet, recent program awards dealing with poverty are $13 million, divvied up between 22 projects spread throughout 5 counties. People are being hired to assist others find low wage employment. Promises of an inland port designed with labor operations, possibly hiring urban residents went bust however; rail transit company CSX still received a New York State funded multi-million dollar upgrade to their local facility, and no urban jobs.

Syracuse is on the precipice of a “surge”, the question remains and becomes poignant, a surge for whom and for what interests? Most areas that are now occupied by high valued entities in and around Syracuse University and the east side were once home to Syracuse’s African American community. Now, there’s a plan to once again move a large number of people of color from a community that’s historically faced challenges. To be replaced by people who have more money to spend.

Now, that’s how you stop the city of Syracuse’s appearance on national lists of municipalities with “concentrations of poverty”, you simply move the impoverished aside. With the assistance of people who look just like you.