Nelson Rolihlahla “Madiba” Mandela 1918 – 2013, has died December 5th at the age of 95, was the architect of South Africa’s transformation from racial despotism to liberal democracy, saving his country from civil war and becoming its first black president

Nelson Mandela guided South Africa from the shackles of apartheid to multi-racial democracy, as an icon of peace and reconciliation who came to embody the struggle for justice around the world.

Imprisoned for nearly three decades for his fight against white minority rule, Mandela emerged determined to use his prestige and charisma to bring down apartheid while avoiding a civil war.

“The time for the healing of the wounds has come. The moment to bridge the chasms that divide us has come,” Mandela said in his acceptance speech on becoming South Africa’s first black president in 1994.

“We have, at last, achieved our political emancipation.” 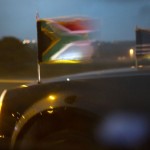 The South African flag flies alongside the U.S. flag as the presidential motorcade speeds to the airport. (Official White House Photo by Pete Souza) 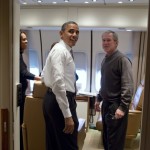 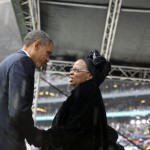 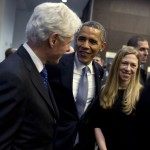 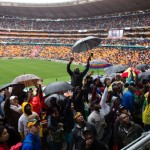 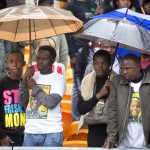 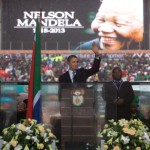 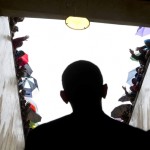 South Africans cheer as President Obama waits in a tunnel at the soccer stadium before taking the stage to speak at Nelson Mandela’s memorial service. (Official White House Photo by Pete Souza

Nelson Rolihlahla Mandela was born into the Madiba clan in Mvezo,Transkei, on 18 July 1918, to Nonqaphi Nosekeni and Nkosi Mphakanyiswa Gadla Mandela, principal counsellor to the Acting King of the Thembu people, Jongintaba Dalindyebo.

After his father’s passing in 1927, the young Rolihlahla became a ward of Jongintaba at the Great Place in Mqhekezweni. Hearing the elder’s stories of his ancestor’s valour during the wars of resistance, he dreamed also of making his own contribution to the freedom struggle of his people.

He attended primary school in Qunu where his teacher Miss Mdingane gave him the name Nelson, in accordance with the custom to give all school children “Christian” names.

He completed his Junior Certificate at Clarkebury Boarding Institute and went on to Healdtown, a Wesleyan secondary school of some repute, where he matriculated.

Nelson Mandela began his studies for a Bachelor of Arts Degree at the University College of Fort Hare but did not complete the degree there as he was expelled for joining in a student protest. He completed his BA through the University of South Africa and went back to Fort Hare for his graduation in 1943.

On his return to the Great Place at Mkhekezweni the King was furious and said if he didn’t return to Fort Hare he would arrange wives for him and his cousin Justice. They ran away to Johannesburg instead arriving there in 1941. There he worked as a mine security officer and after meeting Walter Sisulu, an estate agent, who introduced him to Lazar Sidelsky. He then did his articles through the firm of attorneys Witkin Eidelman and Sidelsky.

Meanwhile he began studying for an LLB at the University of the Witwatersrand. By his own admission he was a poor student and left the university in 1948 without graduating. He only started studying again through the University of London and also did not complete that degree.

In 1989, while in the last months of his imprisonment, he obtained an LLB through the University of South Africa. He graduated in absentia at a ceremony in Cape Town.

Nelson Mandela, while increasingly politically involved from 1942, only joined the African National Congress in 1944 when he helped formed the ANC Youth League.

In 1944 he married Walter Sisulu’s cousin Evelyn Mase, a nurse. They had two sons Madiba Thembekile ‘Thembi’ and Makgatho and two daughters both called Makaziwe, the first of whom died in infancy. They effectively separated in 1955 and divorced in 1958.

Nelson Mandela rose through the ranks of the ANCYL and through its work the ANC adopted in 1949 a more radical mass-based policy, the Programme of Action.

In 1952 he was chosen at the National Volunteer-in-Chief of the Defiance Campaign with Maulvi Cachalia as his Deputy. This campaign of civil disobedience against six

unjust laws was a joint programme between the ANC and the South African Indian Congress. He and 19 others were charged under the Suppression of Communism Act for their part in the campaign and sentenced to nine months hard labour suspended for two years.

A two-year diploma in law on top of his BA allowed Nelson Mandela to practice law and in August 1952 he and Oliver Tambo established South Africa’s first black law firm, Mandela and Tambo.

At the end of 1952 he was banned for the first time. As a restricted person he was only able to secretly watch as the Freedom Charter was adopted at Kliptown on 26 June 1955.

Nelson Mandela was arrested in a countrywide police swoop of 156 activists on 5 December 1955, which led to the 1956 Treason Trial. Men and women of all races found themselves in the dock in the marathon trial that only ended when the last 28 accused, including Mr. Mandela were acquitted on 29 March 1961.

On 21 March 1960 police killed 69 unarmed people in a protest at Sharpeville against the pass laws. This led to the country’s first state of emergency on 31 March and the banning of the ANC and the Pan Africanist Congress on 8 April. Nelson Mandela and his colleagues in the Treason Trial were among the thousands detained during the state of emergency.

During the trial on 14 June 1958 Nelson Mandela married a social worker Winnie Madikizela. They had two daughters Zenani and Zindziswa. The couple divorced in 1996.

Days before the end of the Treason Trial Nelson Mandela travelled to Pietermaritzburg to speak at the All-in Africa Conference, which resolved he should write to Prime Minister Verwoerd requesting a non-racial national convention, and to warn that should he not agree there would be a national strike against South Africa becoming a republic. As soon as he and his colleagues were acquitted in the Treason Trial Nelson Mandela went underground and began planning a national strike for 29, 30 and 31 March. In the face of a massive mobilization of state security the strike was called off early. In June 1961 he was asked to lead the armed struggle and helped to establish Umkhonto weSizwe (Spear of the Nation).

On 11 January 1962 using the adopted name David Motsamayi, Nelson Mandela left South Africa secretly. He travelled around Africa and visited England to gain support for the armed struggle. He received military training in Morocco and Ethiopia and returned to South Africa in July 1962. He was arrested in a police roadblock outside Howick on 5 August while returning from KwaZulu-Natal where he briefed ANC President Chief Albert Luthuli about his trip.

He was charged with leaving the country illegally and inciting workers to strike. He was convicted and sentenced to five years imprisonment which he began serving in Pretoria Local Prison. On 27 May 1963 he was transferred to Robben Island and returned to Pretoria on 12 June. Within a month police raided a secret hide-out in Rivonia used by ANC and Communist Party activists and several of his comrades were arrested.

In October 1963 Nelson Mandela joined nine others on trial for sabotage in what became known as the Rivonia Trial. Facing the death penalty his words to the court at the end of his famous ‘Speech from the Dock’ on 20 April 1964 became immortalized:

On 11 June 1964 Nelson Mandela and seven other accused Walter Sisulu, Ahmed Kathrada, Govan Mbeki, Raymond Mhlaba, Denis Goldberg, Elias Motsoaledi and Andrew Mlangeni were convicted and the next day were sentenced to life imprisonment. Denis Goldberg was sent to Pretoria Prison because he was white while the others went to Robben Island.

Nelson Mandela’s mother passed away in 1968 and his eldest son Thembi in 1969. He was not allowed to attend their funerals.

On 31 March 1982 Nelson Mandela was transferred to Pollsmoor Prison in Cape Town with Sisulu, Mhlaba and Mlangeni. Kathrada joined them in October. When he returned to the prison in November 1985 after prostate surgery Nelson Mandela was held alone. Justice Minister Kobie Coetsee had visited him in hospital. Later Nelson Mandela initiated talks about an ultimate meeting between the apartheid government and the ANC.

In 1988 he was treated for Tuberculosis and was transferred on 7 December 1988 to a house at Victor Verster Prison near Paarl. He was released from its gates on Sunday 11 February 1990, nine days after the unbanning of the ANC

and the PAC and nearly four months after the release of the remaining Rivonia comrades. Throughout his imprisonment he had rejected at least three conditional offers of release.

Nelson Mandela immersed himself into official talks to end white minority rule and in 1991 was elected ANC President to replace his ailing friend Oliver Tambo. In 1993 he and President FW de Klerk jointly won the Nobel Peace Prize and on 27 April 1994 he voted for the first time in his life.

On 10 May 1994 he was inaugurated South Africa’s first democratically elected President. On his 80th birthday in 1998 he married Graça Machel, his third wife.

In April 2007 his grandson Mandla Mandela became head of the Mvezo Traditional Council at a ceremony at the Mvezo Great Place.

Nelson Mandela never wavered in his devotion to democracy, equality and learning. Despite terrible provocation, he never answered racism with racism. His life has been an inspiration to all, who are oppressed and deprived, to all who are opposed to oppression and deprivation.

After a long period of ill health the great former President of South Africa, Nelson Mandela, passed away on 05 December 2013 at the age of 95 years old in his home in Johannesburg.