Following bill’s prioritization by Assembly, Senate Democrats, and IDC Members call on Cuomo to include it in budget

On Monday, the State Assembly included in the CCPA (A.8270A, Englebright) as a priority in its one house budget bill for the second year in a row. On Wednesday, the Senate Democratic Conference followed suit, including the bill in its annual budget priority letter. All eight members of the Senate Independent Democratic Conference cosponsored the bill (S.6617A, Avella) last year, and have since garnered the support of three Republican cosponsors. And on Thursday Senator Brad Hoylman introduced an effectively identical version of the landmark climate bill, lining up the support of his mainline Democratic colleagues. 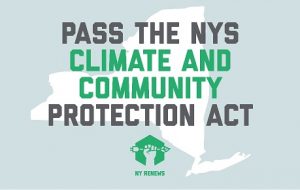 With the State Assembly, Senate Democrats, and the Independent Democratic Conference all pledging support for the CCPA, Governor Cuomo and Senate Republicans are the remaining obstacles to enacting the ambitious climate change policy in 2018. The CCPA mandates that New York reach 100% renewable energy economy-wide by 2050, while setting standards in place to protect workers and climate-vulnerable communities. NY Renews—a statewide coalition of 143 labor unions, community groups, and environmental organizations—has been advocating to pass the bill in both houses.

“The Climate and Community Protection Act will solidify the fact that New York is a leader in renewable energy, environmental justice, coastline resiliency, and sustainability. We must act in order to help mitigate the effects of climate change. As the federal government threatens to jeopardize the progress New York has made, we must continue to do everything within our power to reduce our greenhouse gas emissions and help slow the rate of climate change to ensure the best possible outcome for the state’s public health, environment, and economic well-being,” said Assemblyman Steve Englebright, Chair of Assembly Committee on Environmental Conservation.

The State Assembly has passed the bill twice, by a large majority with members of both the Republican and Democratic parties supporting the bill.

“Climate change is one of the toughest challenges in the state of New York and our entire nation is faced with each season. We all have seen the disastrous effects of massive storms such as Hurricane Sandy and Hurricane Maria which left a path of destruction and many without a home.

Harsh winters, An increase in flooding, increasing temperatures, and rising sea levels threaten our neighborhoods and infrastructure each and every day. We see the initiative from our elected officials, with Community Solar projects but there is still more work to be done,” said Assemblymember Latrice Monique Walker. 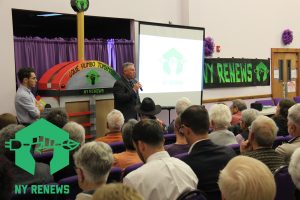 NY Renews is a group of concerned citizens, businesses and municipalities.

“Climate change is a reality.  Although it seems the President and at times others want to refute this fact, the evidence is undeniable.  I’m proud that the Assembly reaffirmed New York’s leadership in protecting our planet by including language in our budget proposal which would implement the Climate and Community Protection Act.  It is my hope that the Governor and State Senate will follow our lead in this regard to preserve this earth for future generations,” said Assemblymember Kevin A. Cahill.

State Senator Brad Hoylman said, “President Trump and his merry band of climate deniers have dedicated themselves to undoing a decade of environmental protections and regulations. In the face of federal abdication states like New York must confront this growing threat of climate change. The decisions we make now will directly impact my daughters’ generation and beyond. That’s why I am proud to work with NY Renews to advance the Climate and Community Protection Act and build a more prosperous and sustainable future for New York.”

“As New Yorkers, we must be proactive in leading the way to protect the environment,” said Assistant Speaker Felix Ortiz. “By passing the New York State Climate and Community Protection Act, we will be protecting the future of our children and grandchildren.”

“Governor Phil Murphy of New Jersey recently announced his support for 100% renewable energy by the year 2050 in New Jersey”, said Dan Sherrell, Campaign Coordinator for NY Renews. “That’s a stark contrast with Governor Cuomo, who is increasingly isolated in his failure to back the CCPA, which would codify the same standard for New York.”

“NY Renews is not just about the environment. It’s about health, it’s about jobs, and it’s about justice. Frontline communities are making their voices heard on the New York State Climate and Community Protection Act because we need to cut greenhouse gas emissions and prioritize investments in the most impacted communities. Governor Cuomo has the urgent responsibility to take bold action for climate justice, and to lead a just transition to clean, renewable energy for all New Yorkers,” said Eddie Bautista, Executive Director of the New York City Environmental Justice Alliance.

Elected officials across the state have demonstrated support for the climate policy platform advocated by NY Renews. Last week the coalition released a letter signed by over 160 local elected officials from every part of the state–including mayors of Syracuse, Utica, and White Plains, Brooklyn Borough President Eric Adams, and 13 New York City council members–calling on the Governor and state legislators to support the coalition’s policy platform.

“New York should be the model of a just transition away from an extractive fossil fuel economy to a regenerative economy powered by renewable energy”, said Ryan Madden, Sustainability Organizer for the Long Island Progressive Coalition. “Governor Cuomo must commit New York State to 100% renewable energy, thousands of good union jobs in the new economy including retraining programs for workers in the fossil fuel industry, and environmental justice by investing in communities most impacted by climate change. This means passing the Climate and Community Protection Act in the 2018-2019 budget. With support from the Assembly, Senate, and Independent Democratic Conference, this is the year to get this bill across the finish line.”

“New York is on pace to fall well short of its climate goals, and it’s low-income communities and communities of color that will pay the price. The Climate and Community Protection Act (CCPA) protects our most vulnerable communities from the worsening effects of climate change,” said Bob Cohen, Policy Director for Citizen Action of New York. “We thank Assemblymember Englebright and Senator Hoylman for recognizing the urgency of our climate crisis and need to transition to 100% clean, renewable energy.”

“The Assembly and Senate Democratic Conference are showing true leadership on climate justice by bringing the Climate and Community Protection Act to the budget negotiations,” said Conor Bambrick, Air & Energy Director for Environmental Advocates of New York. “The state budget offers a crucial opportunity for Governor Cuomo to take bolder action on climate change that is threatening the well-being of New Yorkers across the state. The Governor should take advantage of that opportunity by pushing for the inclusion of the Climate and Community Protection Act in the final budget.”