Niagara Falls to be Illuminated

New Yorkers can help celebrate African American contributions to state history through a series of events, programming and visits to State Parks and historic sites during Black History Month.

“We support Governor Andrew Cuomo’s commitment to better telling the undertold stories of African Americans who helped shape our state’s diverse history,” said Erik Kulleseid, commissioner of state Parks, Recreation and Historic Preservation. “During Black History Month in February, I welcome visitors to take advantage of our displays, events, virtual programming and online content, as well as through safe, socially-distanced outdoor visits to our sites related to this important aspect of our common heritage.”

The Westchester County former Colonial estate was once home to enslaved Africans who labored there and exhibitions at the site will be expanded to include interpretation of that enslavement, the Underground Railroad abolitionist effort, emancipation, the Great Migration, and the Civil Rights movement to celebrate the countless ways in which African Americans have contributed to our shared culture.

Black History Month traces its origins to 1915 and the national 50th anniversary emancipation celebration in Chicago, where African American historian, author and journalist Carter G. Woodson staged a history exhibit.  In1926, Woodson selected the second week in February for Negro History Week as a nationwide event. It grew into a month-long celebration and was federally recognized by President Gerald Ford in 1976 during the U.S. Bicentennial.

To learn more about Dr. Woodson’s life and work, and his founding of the Association for the Study of African American Life and History (ASALH), visit https://asalh.org.

At Niagara Falls State Park, the falls will be illuminated in red, black and green to mark Black History Month on February 13, beginning at 6 p.m., for a 15-minute period at the top of the hour continuing through 11 p.m.

As part of Governor Cuomo’s initiatives to better recognize contributions of prominent African Americans, state Parks opened Shirley Chisholm State Park in Brooklyn, named for the first African American Congresswoman and first woman to run for U.S. President;  dedicated Marsha P. Johnson State Park in Brooklyn (the former East River State Park) in honor of the transgender woman of color who advocated for the LGBTQ+ and HIV/AIDS communities; and installed a statue of 19th century abolitionist and suffragette Sojourner Truth at the Walkway over the Hudson State Historic Park in Highland.

Events and programming scheduled for February include:

Jones Beach Energy and Nature Center, Jones Beach State Park: An exhibition of Black history posters will be displayed, as well as socially-distanced screenings of the documentary film “No Time To Waste: The Urgent Mission of Betty Reid Soskin,” a 99-year-old African American woman who is the National Park Service’s oldest ranger, with a personal story that includes being a union member, singer, activist, mother, legislative representative and park planner. From Feb. 11 to 15, the nature center is hosting free, online screenings of the film. A Zoom discussion will be moderated by Lavada Nahon, Interpreter of African American History, NY State Parks. Registration is available online at jonesbeachenc.org. More information available by emailing jbenc@parks.ny.gov or by calling (516) 809-8222.

Old Fort Niagara State Historic Site, Youngstown: A February 6 tour highlighting African American military service at post from the 18th through the 20th centuries, including the story of formerly enslaved Richard Pierpoint, who served during the American Revolution. The tour will also address the history of the 24th Infantry Regiment, a unit of African American “Buffalo Soldiers” raised after the Civil War. Tour size is limited to 20 persons, and preregistration is required by contacting Erika Schrader at 716-745-7611, ext. 221, or eschrader@oldfortniagara.org.

Clermont State Historic Site, Germantown: A free walking tour at 2 p.m. February 21 on the role of the Livingston family, as well as their enslaved people and tenants, during the Revolutionary War.

John Jay Homestead State Historic Site: A Zoom lecture on the history of enslavement in this prominent Colonial-era family, starting at 7 p.m. Feb. 24. Registration available at johnjayhomestead.org The website also includes virtual exhibits, school programs and tours to explore the Jay family’s history as enslavers, and the dedication of later generations of Jays to the abolitionist cause. 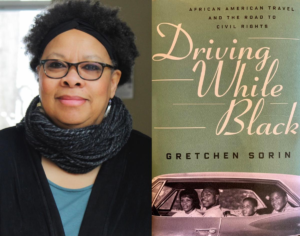 Clermont State Historic Site: A Facebook Live event at 2 p.m. February 20 hosted by comic artist Emily Ree on how the Red Scare of the 1950s led to blacklisting in the comic book industry, which at the time supported a diverse workforce of people of color and women.

Facebook posts on African American related events at Parks include:

Fort Montgomery State Historic Site: This post offers a glimpse into the life of Benjamin Lattimore, one of the few known African American soldiers to fight in this 1777 Revolutionary War battle in the Mohawk Valley.

State Parks is posting a webpage outlining these items and more online at https://parks.ny.gov/history/black-history/default.aspx.

The New York State Office of Parks, Recreation and Historic Preservation oversees more than 250 individual parks, historic sites, recreational trails and boat launches, which were visited by a record 78 million people in 2020. A recent university study found that spending by State Parks and its visitors supports $5 billion in output and sales, 54,000 private-sector jobs and more than $2.8 billion in additional state GDP. For more information on any of these recreation areas, call 518-474-0456 or visit parks.ny.gov, connect on Facebook or follow us on Twitter.