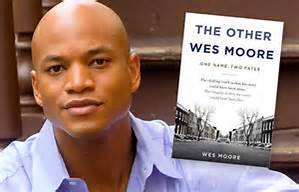 How do two people with the same name and similar life circumstances wind up living dramatically different lives? The answer is the subject of the New York Times bestseller, “The Other Wes Moore: One Name, Two Fates.” 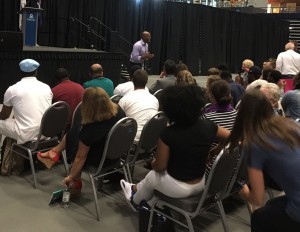 The Wes Moore who experienced a high-level of success in his life shared his story with students and community members. Both Wes Moore’s were born blocks apart within a year of each other. Both grew up in fatherless homes in similar Baltimore neighborhoods. Both hung out on street corners and ran into trouble with the law.

Wes Moore is a youth advocate, Army combat veteran, promising business leader and author. According to Moore he was between two worlds, the prosperity of his classmates and overwhelming challenges faced by his neighbors—Wes began to act up and out, getting bad grades, along with suspensions, and delinquencies. His mother desperate to reverse his behavior sent him to military school in Pennsylvania.

He discussed the military school and how he trying to escape 6 times. By the end of his time at military school Moore was company commander overseeing 125 cadets. He also was named a Rhodes Scholar. 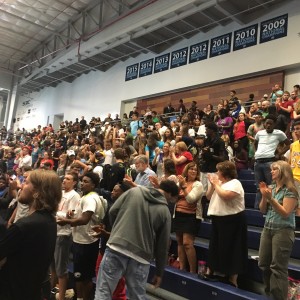 Moore described the process of publishing his book, and the tug of war that erupted over the name.  He finally realized as he reflected, “The problem though, is that you’re missing the point, because you’re absolutely right it’s not about you, and it’s not about him, the name is completely irrelevant you could throw any name on that book title.” 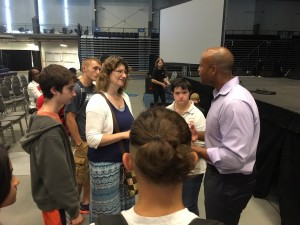 Wes Moore stayed and spoke with audience members. (click on imaged to enlarge)

He reminded his audience that they are there because someone else saw them there. “People you don’t know, people who came before us. There are people fighting for you and your future every day.”

His presentation could have been made before a group of high school students as well as at the college level.  Understanding the elements of poverty, police community relations, what’s going on in our cities today and challenging his audience to do something for someone besides themselves.

He also questioned them on why they’re in school, and what is success? He concluded by discussing how you should have others around you. “If you get to the top of the hill and you’re alone then you’ve done something wrong.”