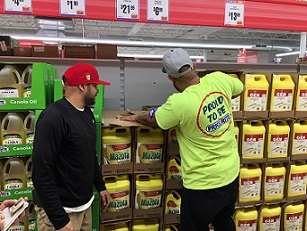 The Syracuse Post-Standard set negative tone with the title of an article that appears to criticize the expenditure of over 5 million dollars in public funding used to construct the newly opened Price Rite on South Ave. Syracuse.  The headline itself set the tone, “Why taxpayers are footing half the cost of a new Syracuse supermarket”.

The story spends a lot of time detailing where the funding came from; New York State provided 1.2 million in grants, Onondaga County provided Jubilee Homes of Syracuse, with a $350,000 grant to purchase the property and an additional $200,000 for the permeable pavement in the store’s parking lot. The City of Syracuse also assisted, making adjacent properties available that were needed for the project. Price Rite has a 10 year lease on the building and Jubilee Homes will receive $50,000 annually for rent.

The Post-Standard failed to mention that this is a county program, “Save the Rain” is designed to benefit the entire community, by keeping unnecessary runoff from being treated at the Metropolitan Sewage Treatment Facility. Many local private businesses and Not-For-Profits participated, the MOST, Onondaga County Public Libraries, Rosamond Gifford Zoo, even churches, received assistance in creating systems to divert their runoff water. However, the Price Right project appeared to be singled out.

The Syracuse Industrial Development Agency granted the store tax breaks totaling $329,140 over a 10 year period. And then there are exemptions from taxes for construction materials saving another $272,000 and $30,000 in relief from the Mortgage Recording Tax.

Immediately, Social Media especially in the “comments” section of Syracuse.com began an assault on the Black Community, questioning the concept of investing in a neighborhood that’s a food desert. Jubilees Homes has overseen the construction of dozens of new homes and the renovation of many others properties.

30 years ago, there were block after block of empty lots; the entire neighborhood had been bulldozed. Houses were built, residents invested in returning to the area.

Under any measurement, an urban success story, however in catering to their suburban conservative readers the Post-Standard caused negative, racist posts on their comments page. The Syracuse.com readers are now complaining about the use of “their” tax dollars, painting a picture of despair within the South Avenue community.

The title itself of the article was inflammatory, while asking and answering the question, “Why taxpayers are footing half the cost of a new Syracuse supermarket”

Then in their Advance Media powered Comments section, people unloaded on our community.

One post read, “This is not capitalism.  It is social welfare at its worst.  In capitalism, businesses do not rely on the government to keep them afloat.  Butttttt, here in the USA and especially in NYS, corrupt lawmakers whom have a hand in everything see to it that projects like this are set into motion…”

Another post called, @The Voice of Reason, said ” Working taxpayers pay for 1/2 the store. Working taxpayers provide most of the money that will be spent there by EBT card. Just about 100% free stuff for a whole neighborhood. So what is the problem? Why must taxpayers completely support a large number of city residents? Has the welfare system made people to lazy to work?”

When confronted, the Post-Standard has claimed that these posts are the work of their media partner Advance Media and there’s nothing they can do about their content.

Websites with Headlines like, “Why taxpayers are footing half the cost of a new Syracuse supermarket.”  Are designed to capture the reader’s attention and generate more “clicks” on the page. It creates a tangible number of readers that you can then pitch to your advertisers.

When projects are showcased, such as the publically funded Lakeview Amphitheater (30 million dollars), the New York State Fair (50 million dollars), the New York State funded State Fair parking lot, highway access ramp and Gondola’s to move people from the fairgrounds to the amphitheater, you don’t see the incendiary headlines.

This story “Why taxpayers are footing half the cost of a new Syracuse supermarket”, created the perfect vehicle for those who dislike African Americans, to regurgitate hackneyed stereotypes on Social Media, for that the Post-Standard should be ashamed of itself.