(Syracuse, NY) The Gifford Foundation and Allyn Foundation are jointly seeking nominations for the 2016 Kathy Goldfarb-Findling Leadership Award (“The Kathy”), an award given to a Central New York nonprofit professional who is creative, collaborative and embraces change. In addition to the honor, “The Kathy” is accompanied by a cash award intended for the recipient’s personal use. The award is open only to those who work in Onondaga, Madison, Oswego or Cayuga Counties.

There is a new streamlined nomination process with a deadline of May 31, 2016 – to apply go to http://www.giffordfoundation.org/nomination-form-for-kathy-goldfarb-findling-leadership-award/. 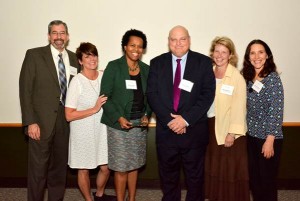 Named in honor of Gifford’s late executive director, who also served as director of strategic services for the Allyn Foundation, the “Kathy” award is given periodically to a Central New York resident who best exemplifies Ms. Goldfarb-Findling’s approach to leadership:

The selection committee, made up of Gifford and Allyn representatives and past recipients, will review nominations over the summer. The recipient will be announced on November 3, 2016 at the “Kathy” Awards. Previous nominations are welcome.