“Pippin is loosely adapted from the life of the historical Pippin the Hunchback, son of Charlemagne. The show opened on Broadway in 1972 with music by Stephen Schwartz and choreography by Bob Fosse, and has since become a Broadway classic.” 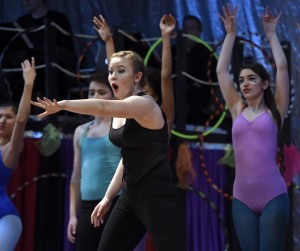 Lucy Purnine sings in her role as Leading Player and ringmaster of the Meadowbrook Harlequins Circus during Nottingham High School’s performance of the musical “Pippin”. Photo by John Berry