The annual Martin Luther King Jr. Dinner Celebration, a community-wide tradition lasting more than a quarter of a century, is one of the nation’s largest celebrations of Dr. King’s legacy on a university campus, including a sit-down dinner for more than 2,000 people on the floor of the Carrier Dome, followed by a festive program featuring our keynote speaker. 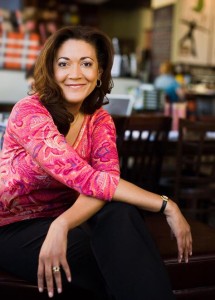 and special correspondent and creator of the Race Card Project (which involves people constructing six-word essays about race, which they then write on postcards), will be the keynote speaker for Syracuse University’s 30th annual Martin Luther King Jr. Celebration, “Remember. Celebrate. Act.” on Sunday, Jan. 18, 2015, in the Carrier Dome. The event is the largest University-sponsored event in the United States to celebrate King.

“We are thrilled and honored to have Michele Norris as our 30th anniversary keynote speaker,” says Sylvia Langford, associate vice president for student affairs and chair of the University Martin Luther King Jr. Celebration Committee. “Her outstanding body of work epitomizes this year’s theme: ‘Remember. Celebrate. Act.’ Ms. Norris’ very relevant message to us will serve as a springboard for the work that lies ahead. Get ready to be moved to action!”

The evening program, which will include the presentation of the 2015 Unsung Hero Awards, music by a community choir and entertainment by student performers, begins at 5:30 p.m. and is free and open to the public. Dinner precedes the program at 4:30 p.m., doors open at 4 p.m. Tables ($300) and individual tickets ($30) for the general public will go on sale Dec. 1 and are available by contacting Ginny Yerdon at Hendricks Chapel at 315-443-5044 or gyerdon@syr.edu.

Student tickets are $15 for students without meal plans and one dinner charge for students with meal plans. Student tickets will also go on sale Dec. 1 and will be available at all residence hall main desks, at dining centers during meal times, at Hendricks Chapel and online at http://www.carrierdome.com (click on student tab) until Jan. 5. For questions, call Hendricks Chapel at 315-443-5044.

American Sign Language (ASL) interpretation and Communication Access Real-Time will be available at the event. To request dietary or other accommodations, contact Ginny Yerdon at Hendricks Chapel at 315-443-2901 or gyerdon@syr.edu by Monday, Jan. 12. 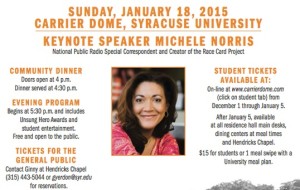 A MLK Community Celebration will be held on Saturday, Jan. 17, from noon-4 p.m. at Fowler High School, 227 Magnolia St. in Syracuse. Community youth will be honored at this celebration.

Norris is an award-winning journalist with more than two decades of experience. She previously served as co-host of NPR’s newsmagazine “All Things Considered,” public radio’s longest-running national program, with Robert Siegel and Melissa Block. Norris began hosting the program in December 2002 and stepped away from “All Things Considered” duties during the 2012 presidential campaign. While on sabbatical, Norris spent time traveling the country developing two successful initiatives: The Race Card Project and NPR’s “Backseat Book Club.”

In September 2010, Norris released her first book, “The Grace of Silence, A Memoir,” which focuses on how America talks about race in the wake of Barack Obama’s presidential election and explores her own family’s racial legacy. Using her memoir as a catalyst for conversation, Norris has addressed thousands of students through campus “One Book” programs, encouraging discussions about the history of race relations in the U.S.

Before joining NPR, Norris was a correspondent for ABC News from 1993-2002. As a contributing correspondent for the “Closer Look” segments on World News Tonight with Peter Jennings, she reported extensively on education, inner city issues, the nation’s drug problem and poverty. She has also reported for the Washington Post, Chicago Tribune and Los Angeles Times.

Norris has received many awards for her work, including the 2010 Alfred I. DuPont-Columbia University Award for “The York Project: Race and the 2008 Vote” (co-hosted with Steve Inskeep); the 2009 Journalist of the Year award from the National Association of Black Journalists (NABJ); and the NABJ’s 2006 Salute to Excellence Award for her coverage of Hurricane Katrina. She was honored with Ebony Magazine’s Eighth Annual Outstanding Women in Marketing and Communications Award in 2007 and was named one of Essence Magazine’s “25 Most Influential Black Americans” in 2009.