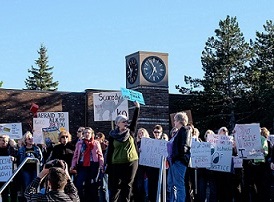 SYRACUSE, NY – May, 18 2017 – CNY Solidarity Coalition and the Syracuse Center for Peace and Social Justice are organizing an open town hall meeting on Tuesday, May 30th from 7:00pm to 9:00pm at Camillus Middle School.  The event, which will be co-sponsored by New Feminists for Justice, Indivisible Cayuga, Voices of Women CNY and CNY NOW, is open to all residents of the 24th Congressional District.  Rep. Katko has been invited to attend and has declined.

“It’s disappointing that the Congressman has chosen not to join us even though the town hall is in his neighborhood,” said Deborah Rose, a CNY Solidarity Coalition member helping to organize the event. The town hall will focus on issues affecting women and children such as education, healthcare, reproductive justice, budget priorities, equality and immigration but all concerns are welcome. Those who wish to speak will have two minutes for their comments and/or questions. 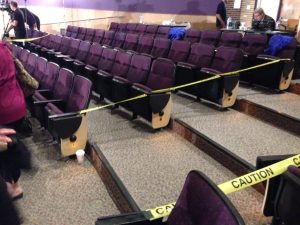 Last Monday, Congressman John Katko held a televised event that he and CNYCentral called a “town hall.” While the audience in the Storer auditorium was limited to 130 pre-registered, security-screened, photo ID-bearing constituents, more than 200 of the Congressman’s excluded constituents demonstrated outside (see attached photos).  “Due to the numerous restrictions the Congressman’s office placed on the format and audience, the event did not fulfill the purpose of a true town hall in practice or in spirit,” according to Dana Balter, a member of CNY Solidarity Coalition who participated in the demonstration. “Instead it was a television forum in which the Congressman evaded carefully crafted questions from constituents and repeated the same talking points we’ve heard many times.” 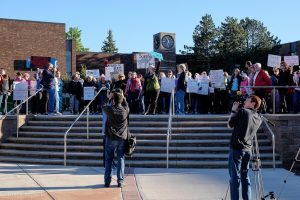 Protest at Katko Town Hall (Click on image to enlarge)

The demonstrators rallied in support of open, democratic participation asking that the Congressman have public meetings, accessible to anyone who wants to attend where his constituents can share their concerns and ask him unfiltered questions. According to Rose, “In this unsettling time, it’s important to speak up and speak out, to share our concerns and support our neighbors. An open town hall gathering is a great way to make this happen.”

CNY Solidarity Coalition, a community-based organization working to protect all Central New Yorkers from the dangers of the Trump-Pence-Ryan agenda, welcomes new members to join its efforts. The coalition’s website is www.cnysolidarity.org and can be reached at 315-472- 5478 or CNYSolidarity@gmail.com.