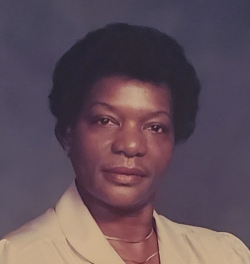 Stonie M. Martin, of Syracuse departed this life on December 5, 2020. Mrs. Martin was born on March 9, 1935 in Auburn, Alabama to the late Belton and Willie Mae Day. She attended Lee County High School. At an early age she joined Bell Baptist Church in Auburn, Alabama. After moving to Syracuse, she joined Tucker Missionary Baptist Church in 1964. She was a faithful member of the Pastor Aide Committee and participated in the Senior Companion Program through New York State. Stonie was also a member of the Syracuse Alabama Club. Mrs. Martin was married to the late Napolean Martin and prior to that union she was married to Clinton Jackson, Sr.

She is predeceased in death by one son, Clinton, Jr; two brothers, Eddie(Francis) Day and John Moss; and one sister, Willie B. Matthews.

Calling hour: Tuesday, December 15th from 11 a.m. to 12 p.m. at Tucker Missionary Baptist Church, 515 Oakwood Ave. A funeral service will follow at 12 p.m. at the church. Burial will be in Oakwood Cemetery.