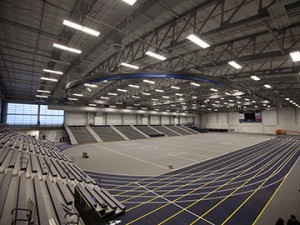 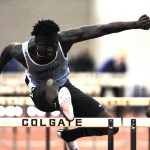 Jeff Menyah, a freshman from Niagara Falls, NY, participates in both the hurdles and jumps.  At the NAZ/Roc City Classic this past Sunday hosted by Nazareth College, he posted the top times in NJCAA Division III of the year in both the 110 and 400 hurdles.  Menyah ran a time of 15.16 in the 110 hurdles, shaving 0.81 seconds off his own personal-best time and also 0.26 seconds faster than any other NJCAA Division III athlete so far this season, and his 400 hurdle mark of 56.99 seconds smashed his previous personal-best by 1.24 seconds. Menyah also posted a bound of 6.77m in the long jump, tying for the third best jump in the country. 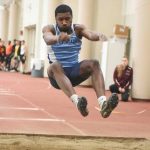 Andrew Hines, a freshman from Sodus, NY, specializes in the jumps for the Lazers.  Since the start of the season Hines has fell in the shadow of Devlin Williams, Onondaga’s 2016 Long Jump National Champion, inching closer to the reigning champion’s top leap every week.  Hines hit his mark on Sunday at Nazareth, leaping 7.17 meters to become the top NJCAA Division III long jumper in the country. The leap also gives Hines the school record over William’s top jump of 7.15 meters set last year.  Hines also ranks third in the high jump and eighth in the triple jump compared to the rest of NJCAA Division III athletes nationwide.

Who else is in the hunt for a national championship?