According to the Onondaga County Sheriff’s Department the Weapon used was a Glock G19 Gen 3 .177 CO2 Action Pistol Handgun

Amazon.com “the CO2 Air gun replica of the Glock 19 in .177 caliber is compact and handy, with the unmistakable look of the original pistol and plenty of power”

According to the Onondaga County Sheriff’s Office, 17-year-old Judson Albahm from the Town of DeWitt was armed with a Glock G19 Gen 3 .177 CO2 Action Pistol Handgun and pointed the weapon at officers at the time of the incident. The newly released information confirms previous reports that Albahm was armed with an air gun, a replica of the popular Glock Handgun.

Descriptions of the product on Amazon.com and other sources say the following about the Air gun used in the incident, “ The CO2 Air gun replica of the Glock 19 in .177 caliber is compact and handy, with the unmistakable look of the original pistol and plenty of power.” The large gun and sporting goods retailer Cabela’s also describes the weapon,  “The Umarex GLOCK® 19 CO2 Air Pistol is ideal for target practice and handgun training, as it closely duplicates an authentic GLOCK firearm. The slide is made of metal, the frame is made of polymer, and it has a trigger blade safety like the original GLOCK pistol.” 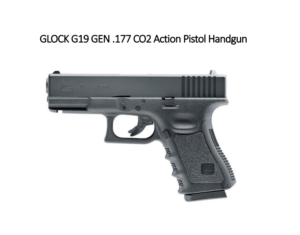 The photo released by the Onondaga County Sheriff’s Department the weapon as an Air gun, it reads “Albahm was armed with a Glock G19 Gen 3 .177 CO2 Action Pistol Handgun”

When viewing the photo of the weapon, if you didn’t know it was an Air Gun, you’d assume it was the Glock 19. Now questions are raised like, were officers aware that this was an Air Gun replica of the Glock 19?  If so, was there an assessment of  the level of danger 17-year-old Judson Albahm was to Law Enforcement and others? Many questions remain.

The issue also exposes class distinctions in how “officer Involved shootings” are treated. Occurring in the wealthier suburbs of Syracuse, people took to social media to express their outrage that “they” the police, could “shoot a child”, while others opined that  “being shot is what to be expected when you point what appears to be a weapon at law enforcement”. There was a collective  gasp when it became known that officials were aware of this being a case with mental health implications, including an unsubstantiated report that the victim to wanted “suicide by police”.

If this occurred in the city of Syracuse with an urban 17 year old, would there be outrage? Would we be having these conversations about law enforcement, lethal force and mental health issues if  the shooting had happened in one of the poorest census tracts in the nation, right here in Syracuse?

The names of the four officers involved who fired their service weapons have been identified as:

Officer involved shootings are either investigated by the District Attorney’s Office or the Attorney General’s Office. The Sheriff’s Office, State Police along with the DeWitt Police are restricted on commenting further until such time the jurisdiction is determined.