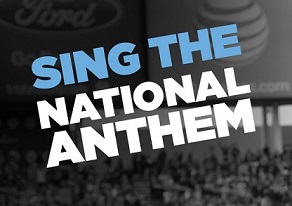 Competition for the daily slots begins today and ends Aug. 2. Competitors should create videos of themselves singing or playing “The Star Spangled Banner.”  They will then upload those videos to the competition site on the Fair’s Facebook page.  A panel of judges will narrow the entries to the top 20, and a public vote that runs Aug. 9 – 14 will choose the 13 people or groups who will perform.

Judges for this year’s event are:

“This is an amazing event.  Every year, we hear from scores of people who want to be the ones to sing the National Anthem to begin our day.  It’s inspiring and its gives the Fair a real American feel that we can’t get by playing a recording.  I encourage everyone to consider giving this contest a shot – it’s a lot of fun!” said Waffner.

More than 300 people and groups have entered the competition since it began in 2015.  While most have been individual singers and duos, past winners have included a keyboard player who performed an instrumental version, and an entire community chorus.  They’ve come from every corner of the state and have ranged in age from young children to senior citizens.

The 13 winning performers will be notified of their performance dates.  The National Anthem is performed live on the Chevy Court stage every morning at exactly 9:58 a.m., moments ahead of the 10 a.m. daily opening for all exhibits and activities.  They may also be asked to perform at other Fair events, as their schedule allows.  Winners will receive admission tickets and parking passes, as well as a $40 voucher for food at participating Fair food stands.

Public voting will be limited to one vote per person and are encouraged to share the competition with their friends and family on Facebook to help their chosen candidate.