Governor Andrew M. Cuomo announced the completion of a major $17 million expansion of the National Purple Heart Hall of Honor in Orange County, not far from where George Washington first established the Badge of Military Merit, the inspiration for the modern Purple Heart. The 7,000-square-foot National Purple Heart Hall of Honor features improved visitor access and new and refurbished exhibit space, with an increased emphasis on stories of individual award recipients. The facility is reopening to the public following an accelerated one-year construction schedule. 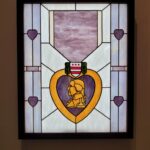 Additionally, at a Veterans Day ceremony to dedicate the new wing, Lieutenant Governor Kathy Hochul unveiled a plaque to honor the memory of the late New York State Senator William Larkin, Jr., who was instrumental in establishing the Hall of Honor in 2006 and secured $10 million for its expansion.

“New Yorkers are eternally grateful to the valiant men and women who have served our country in an effort to protect our freedom and our values,” Governor Cuomo said. “As we honor our service members this Veterans Day, we should all reflect on the tremendous sacrifices these heroes, and their families, have made in order to safeguard our way of life. With the opening of the newly expanded National Purple Heart Hall of Honor, New Yorkers and visitors alike can convey gratitude and appreciation by admiring and learning about all that these heroic individuals had to put on the line in order for us to live in a free nation.”

“On Veterans Day, we are proud to announce the completion of the expansion and renovation of the National Purple Heart Hall of Honor,” said Lieutenant Governor Kathy Hochul. “With support from the state, the late Senator Bill Larkin, a brave World War II veteran and tireless public servant, and others, this facility has grown to include enhanced exhibits and galleries with an increased focus on stories of our war heroes and Purple Heart recipients. The National Purple Heart Hall of Honor stands as a tribute to our veterans and honors their sacrifice. I encourage all New Yorkers to visit this museum and recognize and celebrate the men and women who risked their lives to protect us and keep us safe.”

Opened in 2006, the National Purple Heart Hall of Honor is the first facility in the nation dedicated to the estimated 1.8 million recipients of the Purple Heart, which is awarded to American military personnel who have been wounded or killed by enemy action. 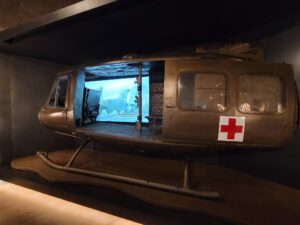 he project added 4,300 square feet of new space to create a new museum wing to upgrade exhibits, improve visitor circulation and provide public gathering space. The galleries/exhibits incorporate integrated audio-visual and media presentations, as well as museum-quality casework for each area with interpretive graphics, locally controlled lighting, touch-screen interactive monitors, and multiple large-format graphic displays. The expanded exhibits will include more personal stories, interactive displays, and artifacts that highlight the experiences of featured Purple Heart recipients. The new exhibits allow the Hall to tell individual stories about joining the service, the day of the incident, field treatment and evacuation, the changing nature of warfare, the consequences of war, road to recovery and the ultimate sacrifice. Exterior enhancements include a redesigned entrance, improved accessibility, native landscaping, more convenient parking and walkway improvements.

During the dedication of the new wing, Lieutenant Governor Kathy Hochul unveiled a plaque to honor the memory of the late New York State Senator William Larkin, Jr., who was instrumental in establishing the Hall of Honor in 2006 and secured $10 million for its expansion. The plaque recognizes Senator Larkin’s lifetime of service, which began at the age of 16 when he volunteered for service during World War II. Later he fought in the Korean War and eventually served more than 23 years in the United States Army, beginning as a private and retiring as a Lieutenant Colonel. After leaving the Army, he served 40 years in the New York State Assembly and Senate, where he was a staunch advocate for veterans. In addition, Senator Larkin was posthumously awarded the New York State Veterans’ and Military Champion Award for his lifetime of service and unwavering commitment to the men and women who selflessly served the United States of America and New York State.

Newburgh philanthropist William Kaplan was awarded the New York State Veterans’ Community Ally and Advocate Award for his outstanding advocacy and support to veterans, active-duty/reserve military and their families in the Greater Hudson Valley Region, as well as for his commitment to establishing the National Purple Heart Hall of Honor in New Windsor. 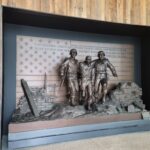 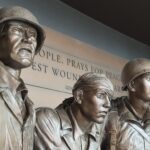 A tribute to our veterans and honors their sacrifice. 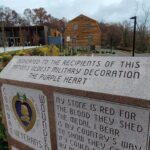 A tribute to our veterans and honors their sacrifice 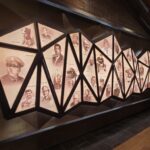 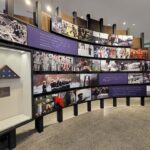 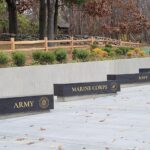 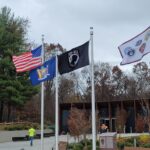 State Parks Commissioner Erik Kulleseid said, “There is much we can learn from the courageous Americans who sacrificed for their country on the battlefield. This newly expanded National Purple Heart Hall of Honor provides a worthy and multidimensional memorial where people can come to appreciate the lives and legacies of service members from across the country.”

Major General Ray Shields, Adjutant General of New York, Division of Military and Naval Affairs added, “Since it was recreated as a modern medal in 1932, the Purple Heart has stood for sacrifice. Service members wounded in battle sacrifice for each other as well as for the United States. This expanded museum will help tell those stories of sacrifice that all who have ever worn the uniform respect and honor.”

“The National Purple Heart Hall of Honor expansion demonstrates Governor Cuomo’s dedication to honoring the immense sacrifices of those who received our nation’s oldest military decoration. The improvements and increased exhibit area provide more opportunities for all to learn and reflect on the importance of this site and to provide a sacred place of honor for Gold Star Families and Purple Heart recipients.” According to Executive Deputy Director of the New York State Division of Veterans’ Services Joel Evans

New Windsor Town Supervisor George Meyers said, “We are both happy and proud to have the Purple Heart Hall in the Town of New Windsor.”

Beginning November 12, the facility will be open from 10 a.m. to 5 p.m. Tuesday through Saturday and 1 p.m. to 5 p.m. Sunday. For information on programs and events, visit https://www.thepurpleheart.com/.

Due the ongoing Covid-19 public health crisis, entrance to the building will be limited to 25% capacity, and visitors will be required to wear face coverings and practice social distancing. Hand sanitizer and masks will be available on site. 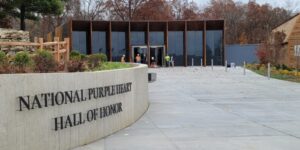 Since the Hall opened, it has drawn more than 176,000 visitors. It offers educational programs for schools, camps, and Scout groups as well as organized tours for adult groups. In addition, events and activities are held throughout the year to commemorate significant anniversaries or historic events related to the Purple Heart and its history. Currently, the Hall has an online Roll of Honor database representing Purple Heart recipients from all 50 states, Washington, D.C., Puerto Rico, Guam, Samoa and the Philippines.

New York State Office of Parks, Recreation and Historic Preservation oversees more than 250 individual parks, historic sites, recreational trails and boat launches, which were visited by a record 77 million people in 2019. A recent university study found that spending by State Parks and its visitors supports $5 billion in output and sales, 54,000 private-sector jobs and more than $2.8 billion in additional state GDP. For more information on any of these recreation areas, visit www.parks.ny.gov, download the free NY State Parks Explorer mobile app or call 518.474.0456. Also, connect with us on Facebook, Instagram and Twitter.