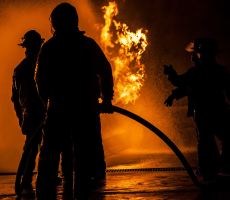 On Saturday, December 26th, 2020, at around 10:57 A.M., Officers and Fire Department personnel responded to the 1000 block of Erie Blvd E for a motor vehicle collision with injuries.   Several callers reported that a vehicle was on fire after striking a building.

Power lines were reported to be down near the vehicle, and the occupants were still trapped inside. The first fire department units were on scene in approximately three minutes and found a heavily damaged vehicle fully engulfed in flames, up against a commercial building. Bystanders had pulled the occupants from the vehicle prior to the fire department’s arrival.

Two critically injured occupants, Arial Freeman, 29, and Tyshawn East, 24, were treated by paramedics from AMR and the Syracuse Fire Department, and transported to University Hospital. East has since been pronounced dead as a result of this collision. Freeman is still in critical condition. The investigation is active and ongoing. “