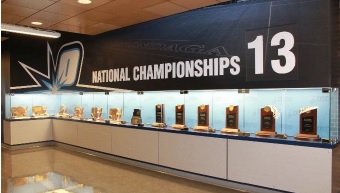 Onondaga Community College Athletics held a public ceremony on Wednesday night with the official unveiling of the Onondaga Athletics Wall of Inspiration located in the hallway between Allyn Hall Gymnasium and Southwest YMCA.

The Wall of Inspiration represents the academic and athletic accomplishments of past and current OCC student athletes. The crowd of student athletes were addressed by Rebecca Hann, Vice President of Ancillary Services, “This wall represents you. You all can be on this wall.” 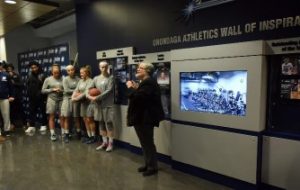 The 2016 Lazers Award recipient, Justin Hussey (Lacrosse) was present to share his experience and pride of being represented on the wall. Justin is currently attending Le Moyne College and a member of the Dolphin’s lacrosse team.

Following Justin was current student athlete Sheba Jackson (Volleyball) who shared how this wall provides her with motivation every day to strive for greatness, “I hope to be on this wall one day, and hopefully in this spot”, as she pointed to Justin’s Lazers Award.

The Lazers Award is chosen by a selection committee based on three areas of excellence: athletic, academic and service. The recipient must be in good academic standing, a current member of an athletic team and hold leadership roles on campus.

The Onondaga Athletics Wall of Inspiration embodies the true spirt of Onondaga Athletics and what it means to be part of the Lazers family. “You represent this community,” said Dr. Casey Crabill, Onondaga Community College President. “You all are the source of Lazers Pride.”