The Onondaga County Democratic Committee met this morning to make designations in State Legislative races.  Candidates vying for the designation spoke and took questions from the audience of committee members from across the county.

In Senate District 50, currently held by John DeFrancisco, the committee endorsed West Genesee Biology Teacher John Mannion. The support was overwhelming, as Mannion won with 67% of the vote.

“In John Mannion, we have a true fighter for Central New York. He will be a passionate advocate in the State Senate on everything from education to the environment. We are pleased to offer him our designation,” said Mark English, Onondaga County Democratic Chair 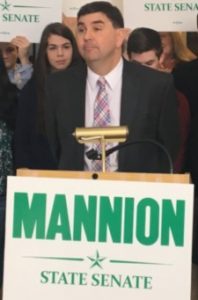 “I look forward crisscrossing this district, listening to my neighbors and working to find solutions to the pressing issues we face. Bringing the voice of regular working people to Albany has never been more important, I can’t wait to raise our voice as the State Senator for the 50th district,” said John Mannion.

The 50th Senate district is one of the most Democratic held by a Republican in the state. It was won handily by both Hillary Clinton (50-45) and Barack Obama (55-43).

Mannion, 49, lives in Geddes, with his wife Jennifer and their three children.