Immediately, charges and counter charges emerged regarding the reason for Syracuse’s abrupt exit from their combined offices at Washington Station.

Ms. Mahoney saw an opportunity to work with the city of Syracuse, “I approached Mayor Miner when the new Washington Station was being built. I approached her with the idea that would bring our Economic Development offices together; it had been talked about in the community for a long time. And coming into the Civic Center for economic development was not really putting our best foot forward to the business community.” 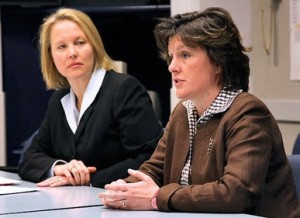 According to the County Executive, “State Law had changed for both SIDA and OCIDA and they were not allowed to do development deals with not- for-profits any more. So there was a void created for a lot of our biggest employers, like ESF, hospitals’, colleges, etc. So, we created an entity to fill the void.”

In response to the new legal guidelines, Onondaga County created a Local Development

Corporation, which kept intact the county’s ability to finance projects such as hospitals, which were no longer eligible. Without this action being taken by Onondaga County, financing of our rapidly growing education and medical sectors of our economy would’ve ground to a halt.

Mahoney continues, “When you do the financing for one of the hospitals or the universities, there’s a 1% fee that’s generated, which can be significant dollars. Since we had that, we agreed to pay 100% of the rent; in addition, we also spent a lot of those fees on other projects inside of the City of Syracuse. So, it was really beneficial to the City of Syracuse that we created this LDC. The County had an entity that could do development deals with the Eds and Meds, the city did not have one. That’s the basis I used to say, we’ll take county dollars and pay all of the rent on this beautiful space in this new building, because it’s good for all of us to come together.”  When the City of Syracuse created its own competing LDC, Onondaga County did not generate the fee’s it once did, therefore Onondaga County felt the City of Syracuse should share in paying rent for the jointly occupied space.

The rent sharing cost was imposed because the City of Syracuse had created a competing development agency, signaling they were no longer going to collaborate.

In a cordially worded letter  dated September 20th 2016 Onondaga County Executive Joanie Mahoney attempted to “clear up some recent confusion”. There has been confusion regarding the relationship between the City of Syracuse Economic Development Office and The Onondaga Civic Development Corporation. In response to statements made by Syracuse City Hall that they were being, “evicted” the County Executive’s letter clearly states, “The Onondaga Civic Development Corporation has no intentions or plans to evict the City of Syracuse Economic Development Office from our co-located offices.” The letter ends by saying, “..again, we have no desire or interest in seeing this historic partnership end. “

According to Mahoney, “The first thing that happened, the city went out on a public campaign to convince people that we were evicting them. The meeting minutes reflects the county’s request for rent”

The County Executive also questions the Syracuse Mayor’s decision to criticize the Onondaga County development agency for failing to place provisions on agreement(s). These provisions would set goals for local and minority employment and subcontracting opportunities.

On June 17th, 2014 the Urban Task Force asked SIDA, the Syracuse Industrial Development Agency to include provisions to impose strict hiring rules as part of the land deal with Cor Development on the Inner Harbor Project. These rules would include, hiring local workers, especially from poverty-stricken areas of Syracuse.

Despite the show of force by the public, exemptions on sales and mortgage recording tax was approved by SIDA in a 4-0 vote.   The development agency members are appointed by Syracuse Mayor Stephanie A. Miner. The deal with COR Development, which included no local hiring directives, was approved by the Syracuse Industrial Development Agency over the objections of the Urban Task Force. Mahoney says, “She handed the harbor deal to her friends, while the urban jobs task force sat in the room demanding a community benefit agreement, and SIDA voted 4-0 and said here’s your tax break”

“I write today in response to your letter of September 20th regarding the City of Syracuse’s economic development office. 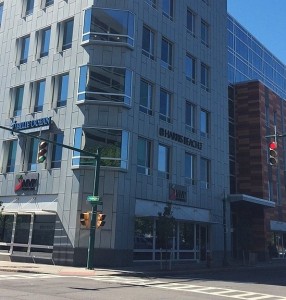 Our decision to co-locate the Syracuse Economic Development Office with the office of the Onondaga Civic Development Corporation was based on the belief we shared a similar philosophy about what constitutes effective economic development. Though we can point to a number of successful collaborations over the years, it has become apparent our core views have diverged significantly…It is evident the county has decided to continue to pursue an ‘any development is good development’ strategy. Over and over again, this trickle-down model of economic development has left our community with developers being richly rewarded and out community reaping, at best questionable benefits. “

The County Executive was stunned by the mayor’s October letter, given their history of working together to benefit the city and county. On October 18th Onondaga County Executive, Joanie Mahoney responded to the mayor.

“Your letter is disappointing but comes as no surprise. We saw your staff packing last week. Your unilateral dismantling of a co-located economic development office without even the courtesy of a telephone call puts your interests ahead of the people we serve. Our administrations are about more than politics and posturing and your actions belie that.”

The letter ends with this notification, “It is our plan to have the County Economic Development office remain in place and our hope in 14 months or less that your successor will agree it’s in the best interest of the whole region for the city and county to partner again”

When asked why she would write such a scathing letter to the Syracuse Mayor, Mahoney’s response was crisp and resolute.

“I wrote this letter because I was personally offended at the notion that I didn’t care about people in the City of Syracuse. When that is not true, nor do any of the facts make it look like that’s true.  The county is the one whose been doing all of the things that she pontificates about, but has not done.” 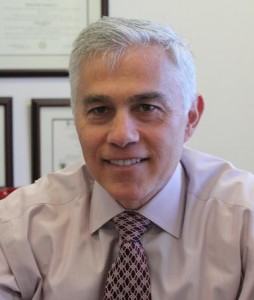 The topic of pay raises has been a hot since the Onondaga County’s Comptroller, Bob Antonacci criticized the legislature, including the County Executive who he’s accused of approving raises which she had no authority to do so. A recent court decision has backed the County Executive’s pay raise, while siding with Comptroller, Antonacci regarding the legislature’s legal ability to vote themselves a raise, at the time the action occurred.

The Onondaga County Executive strikes back at Mr. Antonacci’s claims of impropriety. “What Mr. Antonacci doesn’t explain to the public, is how he can maintain 80 clients in his accounting practice and devote his whole time to the duties of his office”.

A review of Onondaga County’s Charter, where details and responsibilities of our public officials are delineated, there’s language that applies to the Executive Branch of Onondaga County Government.  “The County Executive shall devote his whole time to the duties of his office and shall hold no other public office, except as provided in Section 311 hereof.” The aforementioned language outlines restrictions applicable to the County Executive.

This legal battle waged by Bob Antonacci, and paid for by Onondaga County tax dollars has cost over $400,000.