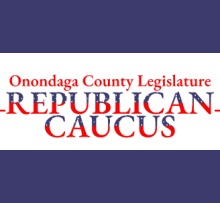 (Nov. 23, 2021) Syracuse, NY – Executive vetoes are never a welcomed occurrence in County Government, but in this instance the Republican Caucus is thankful errors were identified before the new legislative districts were signed into law.

The error in the district lines is based on a misinterpretation by advisors to the Reapportionment Commission of New York State’s brand-new law regarding reapportionment. The advisors understood the new law to require population in each district be within 5% of the median, as opposed to within 5% of each other. We are thankful this mistake was caught and for the opportunity to correct it.

In addition to fixing technical errors, the Republican Caucus will also work with stakeholders to address concerns voiced by residents from the South Side of the City of Syracuse. While we applaud the Commission’s efforts to increase minority representation in the City, we also feel it’s important to use this opportunity to explore possible improvements based on the feedback we have received.

Redistricting is an important, once-in-a-decade process and we are committed to getting it right for the citizens of Onondaga County.