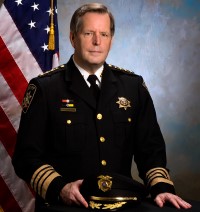 Onondaga County, New York- Eugene J. Conway has announced that he will not seek re-election after spending two terms as the 61st Sheriff to serve the Onondaga County Sheriff’s Office.

Sheriff Conway began his law enforcement career in the late 70’s when he joined the Onondaga County Sheriff’s Office. He served with the office for 24 years where he worked through the ranks from Deputy Sheriff to Captain of the Criminal Investigations Division. During his service he was assigned as a narcotics investigator to the Special Investigations Unit, supervisor of the Warrants Investigation Unit, and Road Patrol Watch Commander. In his capacity as the Captain of Criminal Investigations he oversaw all investigative Units within the Sheriff’s Office to include two presidential details and a serial bank robbery task force. In April 2002 he accepted an offer to become the Chief of Police and Public Safety for the Town of DeWitt Police Department. In 2007 he also served in a temporary capacity as the Chief of Police for the Village of East Syracuse Police Department. In 2015 he became Sheriff of Onondaga County.

Below is a statement prepared by Sheriff Conway

“I have decided not to seek a third term of the Office of Sheriff. As I am now in my 45th year of law enforcement and as this profession will always go on there comes a time when those who serve “hand it off” That time is the end of this year for me. More importantly there is still much work to be done and accomplished. It is a privilege to hold this position and I remain committed to serving the remainder with the same dedication as I pledged to when I took office.”