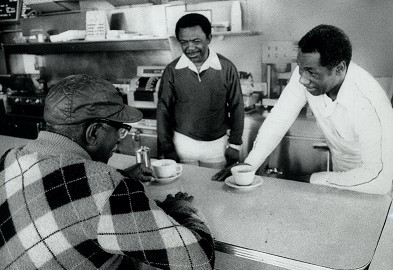 As part of its ongoing partnership with Syracuse Stage, the Onondaga Historical Association (OHA) has produced a seven panel exhibit that will be on display in the theater lobby during the run of August Wilson’s play, Two Trains Running.

Wilson’s play is set in 1960s Pittsburgh when the forces of civil rights and urban renewal, often came into conflict. OHA’s exhibit draws parallels with Syracuse at the same time, when local urban renewal efforts called for widespread demolition within the city’s primary African-American neighborhood – the 15th Ward. OHA’s exhibit includes historic images of the 15th Ward and introduces its significance for the local black community.

Another interpretation of Wilson’s title, Two Trains Running, is that it functions as a metaphor for the different methods that developed in the 1960s civil rights struggle: Malcolm X’s aggressive and separatist philosophy for African-Americans that evolved into the “Black Power” movement, along side Martin Luther King’s and Whitney Young’s approaches – that urged a strident but more cooperative, open dialogue on improving race relations. The exhibit shows that these movements were reflected in Syracuse politics, as well.

1)Title Panel showing an aerial view of Syracuse’s 15th Ward in 1941, prior to Urban Renewal

2)Panel 2 shows two images of the 15th Ward in the 1960s: Urban Renewal Demolition and the Construction of Rt. 81

7)Panel 7 compares the local African-American civil rights movement in the 1960s with the analogies in August Wilson’s Two Trains Running, that the Civil Rights movement, nationally, had two approaches, exemplified by Malcolm X and Black Power compared to Martin Luther King and his civil disobedience tactics which sought to bring about a mutual dialogue with white society

Images of the 15th Ward

The Onondaga Historical Association (OHA) created a seven panel historical exhibit, Images of the 15th Ward in Syracuse, on display in the theatre lobby during the run of the play. The exhibit showcases photographs of Syracuse in the 1960s, drawing parallels to the history and politics of Pittsburgh, the setting of Two Trains Running. The images show the local urban renewal efforts of the 1960s to demolish Syracuse’s predominantly black 15th Ward. The display is available for travel contact The Onondaga Historical Association (OHA) for additional information.