At first read the Draft Natural Resource and Damage Assessment and Restoration Plan Potential Projects appears to be an exciting initiative. Creating a new trail connecting Old Erie Canal Trail to Onondaga County’s trail, numerous ideas and concepts have been introduced according to the recently released draft to “restore and protect wildlife habitat and water quality and increase recreational opportunities at Onondaga Lake”. 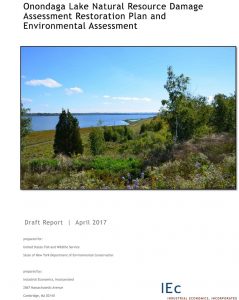 Throughout this process, a group of concerned residents have been protesting the restoration project claiming that it ignores areas leading to the lake. At the southern portion of the creek there are Tully Valley Mudboils that deposit material into Onondaga Creek, contributing to the problem of possible flooding and should be included in any restoration of Onondaga Lake and its surroundings.

Syracuse United Neighbors, CNY Solidarity Coalition, and Neighbors of the Onondaga Nation, and others, staged a protest at the meeting of Trustees for Onondaga Lake. Participants are concerned that the plans don’t go far enough. According to Louise Poindexter,  “The city part of Onondaga Creek is not being addressed, there are things that can be done to prevent city residents from have to get flood insurance”. Ms. Poindexter continues, “In the Meadowbrook part of Syracuse they built an area to contain water and prevent floods. That can be done with Onondaga Creek.”

According to the groups staging the protest,” The public process around selection of restoration projects for Onondaga Lake is a joke.”

S.U.N. and other members of the community including the Onondaga Nation are not pleased with the restoration plan and its failure to include Onondaga Creek; protestors claim that city portions of the creek are just as important as the immediate area surrounding Onondaga Lake.  At the protest SUN’s Rich Pauchalski mentioned the lack of inclusion of the African-American population as a reason for concern. “As you can see there are few African-Americans involved with this the group, it lacks diversity”.

According to the Onondaga Nation, in response to the massive cleanup plan of Onondaga Lake, “This plan does NOT effectively contain toxic chemicals and heavy metals that will be left in the lake-bottom sediments. Caps are not a reliable form of containment – they will fail, and whether it is in 10 years or 110 years, it is only a matter of time. And when that happens, the chemicals will be re-released into the ecosystem.”

Upon review it’s clear that the plan ignores Onondaga Creek as it travels through the City of Syracuse. Protestors are critical of the plan that if it were “inclusive” would include the portion of Onondaga Creek that runs through the city. S.U.N.’s Executive Director, Rich Pauchalski, in published reports has stated, “The creek could be dredged, the brush and the trees along the creek could be cut back to reduce the flood risk. There could be work on the dam that’s on Onondaga Nation. There could be a holding pond. There could be a lot of other alternatives,”

There are ideas that are being presented to the public as part of restoring Onondaga Lake, New trails, deep water fishing areas, creating 100 acres of native grassland habitat, floodplain forest enhancements, in-lake habitat enhancements, and a visitor’s center.   Just to name a few, dozens of plans that have been prepared by the working group led by the New York Department of Environmental Conservation, and U.S. Fish & Wildlife Service.

The following list was released as part of the Draft Natural Resource and Damage Assessment and Restoration Plan Potential Projects. 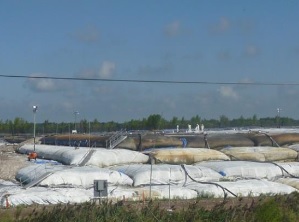 Bags of sediment from Onondaga Lake

The U.S. Fish and Wildlife Service and the New York State Department of Environmental Conservation have worked to create proposals for consideration.  However, the public only has a short time to review  the 73 page “Damages Assessment” that was released on April 24th only one public meeting to discuss the plan. The public has until June 2, to submit written comments to the plan. There is not enough time to review this plan, according to protestors and other critics, this appears to be rushed.

There are questions that have been raised by SUN protestors, leaving the May 11th meeting at its conclusion, frustration showed on Louise Poindextors face as she said, “Why are they ignoring Onondaga Creek as it flows through the city? That’s what I wanna know”.