In recent weeks there has been information in the news about local economic development and regional initiatives designed to improve our economic conditions. The Governor visited with a list of 47 agenda items designated, “Capital for a Day” as he came to Syracuse. Meanwhile, Centerstate CEO has applied for funding through the Central New York Regional Economic Development Council’s proposal. Both are designed to have a positive impact on Upstate New York economy.

What many aren’t aware of was a program proposed for Syracuse, 20 years ago that would attack the lack of goods and services in impoverished underserved communities. The plan called for creating worker- owned and operated businesses. This fact finding study was conducted by an Ithaca College “Urban Crisis Resolution” economics class in 1994; the following is a summary of what was proposed for Syracuse’s Near Westside, 20 years ago. These same principles are applicable today.

In 1994 Ithaca College’s Assistant Professor of Economics Michael Monroe devised Operation SEED (Socio-Economic Empowerment through Democracy) as an antipoverty program with a difference. SEED focuses on the residents as a community’s greatest, asset. Two key questions face planners concerned with economic development in poor neighborhoods, How to attract productive enterprises, and who to attract. In the zeal to address the first concern, the second is often ignored.

This results in municipal development agencies attracting too many enterprises that consider only private costs and benefits; consequently; they do little or nothing to support the socioeconomic development agenda of their host communities.

What so often happens is that businesses come in, getting cheap labor and tax incentives. Then after a few years they pull out and go elsewhere, leaving the people who were working for them with nothing to show for it. Jobless again, they can’t afford to maintain their homes and the neighborhood falls into another cycle of disrepair and despair.  SEED is designed to break that cycle not only by providing residents with an immediate opportunity to earn a decent wage but also by preparing them for the rigors of responsible enterprise ownership so they can control their own fates.

That’s where SEED comes in, neither welfare nor workfare, it is intended to provide both real and lasting economic development and the support services inner-city residents need. The program’s cornerstone is a for-profit holding corporation, Fundamental Incubation and Resource Management Services (FIRMS), which will operate several business enterprises; and a nonprofit development corporation, the Center for Economic Democracy (CED), which will address social issues by providing employee education and training, daycare centers, and a substance abuse half-way house. (We already have a variety of agencies dealing with substance abuse and rehabilitation, this is just an example of a client base that can be tapped into for employment and training in the enterprises created by FIRMS.) 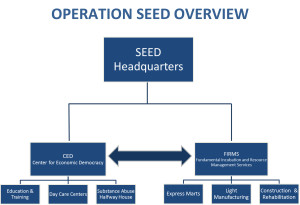 The plan call, for FIRMS to establish, nurture, and develop over the course of three to (four years a maximum of 12 businesses, each capable of employing on average 40 to 45 neighborhood residents. During this Start-up period, employees will receive literacy and skill training while learning the responsibilities of business ownership. When an enterprise demonstrates that it has complied with preset criteria, it will be sold to its workers through an (ESOP) Employee Stock Ownership Plan. The cycle of new business creation will continue with the intent, to ultimately break the ties of dependence on welfare and other institutions constituting the social safety net.

Initially, three kinds of businesses are planned for SEED, each designed to provide benefits beyond jobs alone: “express mart” grocery stores to sell merchandise at reasonable prices, including craft items made by residents of halfway houses; light construction firms would build and rehabilitate SEED’s own facilities and neighborhood houses; and wooden product manufacturers to supply prefabricated houses to the construction enterprises. 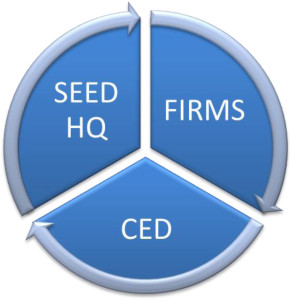 Dr. Monroe’s, Ithaca College Urban Crisis Resolution class was divided into groups that studied the various components of SEED. They came up with the business plan for the express marts-not a Wegmans-type megastore, but bigger than a 7- Eleven- that would bring a better line of goods to these communities and be accessible to residents by being within walking distance.

SEED does require start- up funds (seed money, if you will) as its various components are phased in. The estimated $3 million needed could be sought from a variety of public and private sources.

We have to remind local governments that you cannot build gleaming convention centers and domes and parking garages while ignoring the poorer neighborhoods, because when you have these kinds of economic sinkholes you aren’t going to get your tourists and conventioneers. We have to convince leaders it’s in their best interest to see people in the inner city work, that it creates a much healthier community and you can then attract business.

The projects creator is blunt, “Some of the firms may fail, and there’s no guarantee that they will stay democratic,” Monroe says, “There’s going to be some resistance from people who are already getting more than their share of the pie. But if through SEED we can create more jobs and substantially increase incomes in the targeted neighborhoods, we’ll be able to make the whole pie bigger-benefiting everyone.  It can be applied to any city where there is a high enough concentration of poverty and other circumstances that would make it effective.”